It's been two-and-a-half years since Michelle Obama was First Lady of the United States, but her work uplifting communities, breaking down stereotypes, and empowering people around the world is far from over. At this year's 25th annual Essence Festival in New Orleans, Obama sat down with O, The Oprah Magazine's editor-at-large Gayle King to discuss her bestselling memoir, Becoming, and how she's hoping to inspire others—especially minority communities—with her story.

"People have found and recognized themselves in the stories of this little Black girl who grew up on the South Side of Chicago," Obama told King. "I knew it was important in writing Becoming, that I had to sit with the fact of how rare it is, that a Black woman gets to tell her own story in a book that will be read by millions."

In case your invite to the Essence Festival got lost in the mail too (maybe next year!), here are five life lessons from Michelle Obama to become your healthiest, most fulfilled self:

1. You deserve to take care of yourself.

Between caring for kids, aging parents, and an endless list of daily to-dos, you may find it nearly impossible to make time for yourself. Obama would tell you she's been there, too.

"A lot of mothers will understand this, because I found myself looking around after I had my kids, and I didn't have time for me," Obama said. "I think for us as women, many of us, we have a hard time putting ourselves on our own priority list, let alone at the top of it. We are so busy giving and doing for others that we almost feel guilty to take that time out for ourselves."

The former First Lady agreed with King that women have trained themselves to think this way, but that needs to change. "We have to have a different set of conversations to un-train us," Obama said. "It's not something that's going to happen overnight. But we have to start having some conversations about why is it so hard for us as women to put ourselves first. We see people imitating us but not giving us credit for the beauty that we hold, you know?"

She added that men play an important part in this, too. "Let me tell you, my father and my brother had the greatest impact on my self-esteem, because I grew up in a household with men who loved me and respected me very early on, who told me how beautiful I was, who treated me as an equal."

2. Never take your health for granted.

One of the most heartbreaking parts in the book is when Obama writes about her father and his battle with multiple sclerosis. Gayle pointed out during their conversation that Obama is 55, the same age that her father was when he passed away.

Obama said it's why she doesn't take her health for granted today, "because my father was an athlete—he boxed and he swam, and because of this disease, he died not being able to walk without the assistance of crutches. He was a man who valued movement and it was taken from him."

She added: "We lose many people to things that they can't help, but when it happens because of stuff we have complete control over, the food we put in our bodies, how we move, whether we go to the doctor on a regular basis, whether we're watching out for diabetes and asthma, whether we're doing things to prevent completely preventable illnesses, I start thinking about, my God, my father didn't get to meet [our] two beautiful girls. They didn't know the man that raised me, they didn't get a chance to really experience the values he gave to us, and I think what a loss."

3. If you can't break your own habits, look to your kids.

King noted Obama's focus on health and kids while in the White House, and to that Obama replied: "One of the reasons I took that issue on is because I saw very early on that we are dealing with an obesity epidemic in our children that will shorten their lives. Our children are growing up less healthy than we are, which means that their life expectancy will be shorter than us. My hope was that sometimes as parents we can do for our kids what we just can't find in us to do for ourselves." 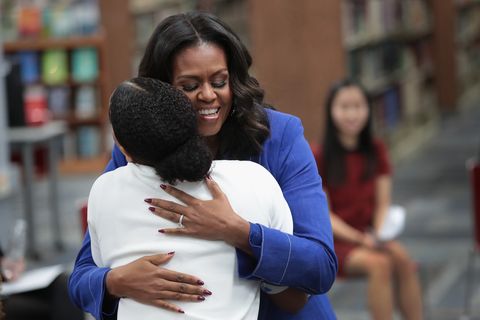 And even though not everyone has the resources to buy organic everything and take boutique fitness classes every week, Obama said our health is "one of these things that no one can take from you. No matter what your race, your socioeconomic background, your educational level, we all have the ability to own our health."

4. Seeking counseling is not weak.

Of course, Michelle is married to former President Barack Obama. They've had their ups and downs, just like any couple 27 years in, and Obama is open in Becoming about going to marital counseling.

"Young couples think that all they see of us is the fist bump and the love and I'm looking adoringly at his speeches," she said. "And my view is that we can't be up here as role models and not [be] telling people the truth about life and relationships. Marriage is work. Marriage is hard."

She went on to say that her husband loves her for being a strong woman. "I was talking to a good friend of mine earlier today, about thinking about marriage like we think about sports," she said. "I mean, my husband is my teammate and if we are going to win this game together, he has to be strong and he has to be okay with me being strong. I do not want a weak player on my team, nor does he."

"Yes. I support that principle," Obama joked when King asked about her thoughts on having great sex at every age. "I mean, come on Gayle! What I'm 'sposed to say to that? 'No, I take issue with that?' Yes, Gayle, the answer is yes!" Hey, ladies—we agree!