Tobin Heath, who plays an outside forward for the U.S. Women's National Team, is known for her cheeky personality and quick cuts on the soccer field. ESPN calls her "one of the most technically skilled players the U.S. women's national team has ever had on its roster," making her a major threat to Sarah Bouhaddi, France's goalkeeper, in tomorrow's World Cup finals. Here are five things to know about "Tobs" (as her loved ones call her) as you watch her in tomorrow's final match:

1. Heath is a three-time Olympian.

Heath represented the USA in the 2008, 2012, and 2016 Olympic Games. You can also call her a two-time Olympic gold medalist, as she nabbed a top spot on the podium at the 2008 Beijing Olympic Games and again at the 2012 London Olympic Games. While she didn't medal in Rio in 2016, she placed 5th. Heath debuted at the World Cup in 2011 and returned again in 2015. She also scored a spot on this year's World Cup 2019 roster and landed in the starting lineup against England, France, Sweden, and Spain. 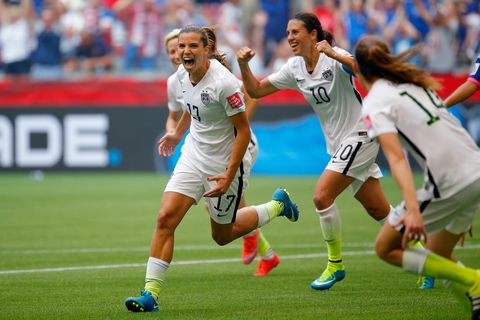 Heath, just after scoring against Japan in the Women's World Cup in Canada on July 5, 2015.

2. On the field, she's known for the nutmeg.

Heath is known as somewhat of a wise cracker in the soccer world, so much so that she's been dubbed Queen of the Nutmeg. A nutmeg is not a spice in this case—it's when a ball is kicked, dribbled, rolled, pushed, or thrown between an opponent's legs. Here's Heath doing it on the field:

Oh, and she did a double nutmeg here:

This one, from Team USA's first 2019 World Cup game against Thailand, almost broke the internet:

3. Off the field, she's known as a free spirit.

Born on May 29, 1988, in Morristown, New Jersey, Heath grew up with affection for surfing and skateboarding alongside soccer. Eventually leaving her hometown of Basking Ridge, New Jersey, for college at UNC Chapel Hill, she loved communal living because of "the ability to walk into the hallway and juggle or play guitar with whomever was there," her USWNT bio says.

While on a soccer team retreat at Ocean Isle Beach, Heath, a senior at the time, famously passed over the regular beach house beds for an air mattress, which usually went to the underclassmen. "I'm sure they still use this AeroBed," her former teammate Brittani Bartok told ESPN. "A freshman every year is probably like, why is my bed sandy? And it's because Tobin used it as a surfboard."

After graduating from Chapel Hill in 2010, Heath crashed on friends' couches between national championships and international tournaments, finally buying a permanent home in Portland after the 2015 World Cup. After this year's world championship, she'll return home to Portland to play for the Portland Thorns FC.

4. She got her start at the local YMCA.

Yep, the now world-class athlete first kicked around a soccer ball at a local YMCA in Basking Ridge, New Jersey. She was 4 years old at the time. "I think I always had, like, a rebellious spirit," Heath told ESPN. "But it wasn't a rebellious spirit to do wrong. It was a rebellious spirit to do something different." Spotted during a tryout for an under-10 youth league, Heath was selected for the Players Development Academy, founded by former Wall Street executive Tom Anderson. (It's now revered as one of the best youth programs in the country.) Anderson has said that Heath caught her eye because "no one could catch her" when she had the ball.

5. Her entry into the pros almost ended her soccer career.

By the time she graduated from UNC in 2010, she was already an Olympic athlete, subbing in three times for the U.S. team leading up to Beijing in 2008. But soon after being the No. 1 overall pick for the Women's Professional Soccer league, she suffered an ankle injury, weakening her game up until the Women's Professional Soccer league folded in 2011. She signed with Paris Saint-Germain in 2013 and played for France until arriving in Portland in 2013. At that point, she was known for creativity in her game but Jill Ellis, who'd taken over the national team in 2014, wanted to make sure Heath could deliver results (i.e. assists and goals) on an international field. Heath went on to score 12 goals and 21 assists in her 106 games with the national team through 2015. She scored her first 2015 World Cup coal in the finals against Japan (see photo above). Heath was the U.S. Soccer Female Player of the Year in 2016. She is know viewed as one of the most technically elite soccer players in the world.

Devin Tomb Devin is Prevention.com's executive editor and has written everything from deeply reported features to well-curated gift guides (if she does say so herself).