The Optavia Diet May Not Be Effective for Long-Term Weight Loss, Dietitians Say

While it hasn't yet achieved the ubiquity of trendy diets like Keto, Paleo, and Whole30, the Optavia diet plan is getting a lot of buzz on social media. It was also one of the top-ten most Googled diets last year—though so far the biggest celebrity to admit to jumping on the Optavia bandwagon is Cake Boss's Buddy Valastro. So what is this "lifestyle" plan that your friend's cousin says she lost so much weight on? Can you really drop major pounds and keep them off? Let's get down to it.

First, the background: What is Optavia?

Optavia is actually a new version of an older diet, Medifast, which was created by a doctor in 1980 and involved packaged shakes, bars, and snacks. The plan was updated a few times, and in 2017 a new iteration for the digital age, Optavia (rhymes with Mamma Mia), was launched. When you sign up for Optavia, you purchase foods online and get connected to a personal coach, who is in most cases a former client eager to share the gospel of Optavia (and who also gets paid a commission on all the food you order, plus bonuses and additional commissions for recruiting and supporting other coaches). The coach helps you work through a "Habits of Health" program—commonsense health goals like using the stairs instead of the elevator and drinking lots of water—but the main sell of the program is still those packaged shakes and bars.

How does the Optavia diet work?

In the initial "Optimal Weight 5 & 1" phase—which can last 12 weeks, 6 months, or longer, depending on how much weight you want to lose—you eat six small meals a day, spread out every 2 to 3 hours so you don't get hungry and your blood sugar levels remain steady. So far, great idea! But there's a catch: Five out of the 6 "meals" consist of processed, packaged meal replacements called Fuelings.

There are about 60 different kinds of Fuelings available for sale on the site (a starter pack that includes 119 servings costs $392). Choices include savory dishes like pasta, oatmeal, mashed potatoes, and soups (all of which come in dehydrated packs; you add water and pop in the microwave), but the majority of the items are shakes, bars, cookies, and crunchy snacks (Chili Nacho Cheese Puffs, anyone?). Each of these Fuelings has around 100 calories and contains what Optavia calls "a high quality protein" and a probiotic for digestive health. 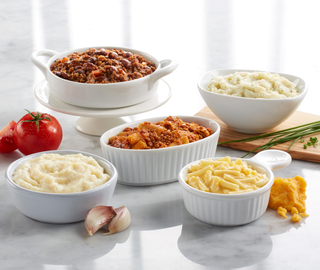 A selection of Optavia's Fuelings, founds on its website.

"Once we start referring to meals and snacks as Fuelings, we're already in trouble," says Jaclyn London, MS, RD, CDN, director of the Nutrition Lab at the Good Housekeeping Institute, who is also the author of Dressing on the Side (and Other Diet Myths Debunked). "Food is meant to be enjoyed in order to provide nourishment in any and every form, and labeling it as fuel ignores that fact."

In this phase, you're allowed to eat fresh food just once a day, for your "Lean & Green" meal, which you prepare yourself (or, with some effort, order in a restaurant): It should include 5 to 7 ounces of a lean protein, such as fish, chicken, eggs, or steak; up to 2 servings of a healthy fat such as avocado or canola oil; and a heap of non-starchy vegetables. No fruit, potatoes, dairy, bread, or grains are allowed, and alcohol is a definite no-no.

This all adds up to 800 to 1,000 calories per day. To put that in perspective, a woman in her forties needs a minimum of 1,800 calories a day, according to USDA dietary guidelines; 1,000 calories is the recommended amount for an average 2-year-old.

So, when do you go back to real food?

After you've reached your goal weight, you switch to a transition phase, in which you can eat 3 Lean & Green meals a day, slowly adding in fruit, dairy, and whole grains, but continuing to supplement with 3 Fuelings per day. "We give clients guidance to help them stop being in the fat-burning phase and transition to a balanced, healthy state," says Optavia Coach Jan Paxman. She points out that clients can eventually transition to a completely whole-food diet, though, she says, "Most of them find that it's helpful to continue to use the Fuelings, because it keeps it very simple and cost-effective. If they're grabbing fast food or snacks at vending machines, they end up spending at least the same amount or even more."

Well, you'll certainly lose weight. There's no question that if you stick to the extremely-low-calorie plan, you will shed pounds fairly quickly. (Though the site has many stories of people who lost 100 pounds or more on Optavia, the company is careful to point out that the typical weight loss is 12 pounds over 12 weeks.) Pamela,* a small-business owner in New York, says she's lost 50 pounds in 6 months, and it's been a good experience, though she hasn't transitioned yet to the maintenance phase. "My husband and I consistently lost week after week, even when we ate out for dinner," she says.

It's easy. You don't have to think about your food much at all on this plan. Once a day, you throw some protein on a pile of vegetables for a meal; the rest of your meals require nothing more than tearing open a package and putting it in the microwave.

There's community support. In addition to the coaches, who check in by phone, text, or email once a day for the first four days, then once or twice a week for next 12 weeks, there are also Facebook pages and webinars. "Accountability and community are key components to any behavior-change program, so if there is one gold star to give here, it's for the support," says London, who points out that you should check in with your physician before starting any extreme diet plan, especially if you've had a history of eating disorders or you're on any medications.

You're eating a lot of packaged, processed food. Optavia is adamant that these dehydrated mashed potatoes, shakes, and bars are healthy, nutritionally balanced, "all natural" meals. One look at the ingredients, however, shows that "natural" is in the eye of the beholder. The first five ingredients on the basic chocolate shake, for example, include: Soy protein isolate, fructose, dextrin, cocoa powder (processed with alkali), and whey protein concentrate. "'No artificial ingredients/preservatives' does not mean it's a real food," says London. "Especially when the first ingredient is a soy protein isolate, which means a nutrient found in food is isolated to create a new, man-made food product."

"There are so many snacks you can make with whole foods that are healthy, low in calories, and filling," adds Bonnie Taub-Dix, RDN, creator of BetterThanDieting.com and author of Read It Before You Eat It—Taking You from Label to Table. "Just take nonfat milk and mix with a banana and ice for a smoothie, and you'll have a healthier shake. Instead of eating a pack of dehydrated pasta, why not have a bowl of zucchini noodles or a small portion of whole-wheat pasta topped with fresh veggies and a protein?"

And the tastes aren't for everyone. "I couldn't stick with Optavia because the food wasn't very tasty and I got bored with it quickly," says Justin, a periodontist in Maryland who lost 10 pound in two months on Optavia, and then gained it all back. "I had a shake every morning and ate a couple of the pastas, but you there's only so much powdered food you can eat in your life." Even Pamela, who is still on the plan, says she only likes a handful of the Fuelings—the bars, shakes, and sticks—though her husband is a bigger fan of the savory meals. "Countless surveys have shown that the top reason we choose our food is first for taste, and then for convenience," says Taub-Dix. "This may ring all the bells on convenience, but it falls short on taste."

It's hard to sustain over the long run. Optavia points to a recent study that shows Optavia (and its sister diet, Medifast) help dieters lose more weight over 16 weeks than a regular low-calorie diet, but—surprise!—the study was paid for by Medifast, Inc. There don't appear to be any independent studies that have assessed the long-term success of this diet. "The diet may help short-term, since you're restricting total calories by limiting carbs, but restriction long-term can be unsustainable," says London. Taub-Dix adds that this type of restrictive diet makes it difficult to eat with the rest of the family or go out to social events without feeling like an outcast.

"Eating real, nutrient-dense, delicious and health-promoting food for long-lasting behavior change that sticks is the only way to lose weight and actually keep it off," says London. "Why consume vitamins and minerals in a powdered shake or bar when you could eat real food from which you'll benefit mentally, physically, and psychologically—through shared experiences around meals and snacks that provide flavor and nutrition."

The Optavia Diet May Not Be Effective for Long-Term Weight Loss, Dietitians Say, Source:https://www.prevention.com/food-nutrition/a28481383/what-is-optavia-diet/