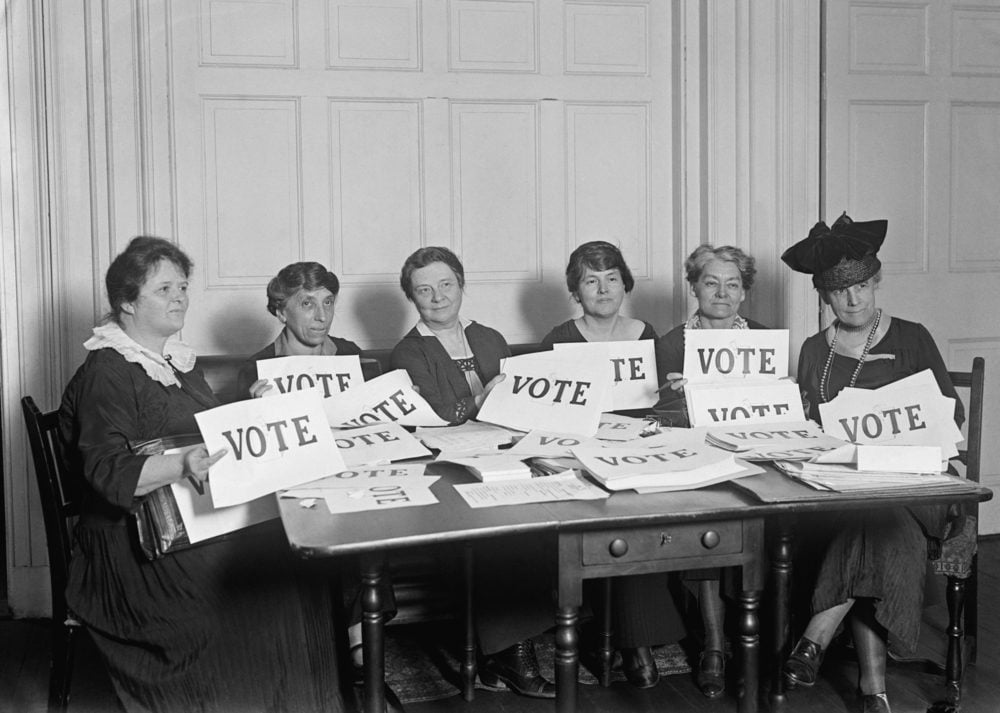 The United States won women's suffrage ahead of several other countries, including Britain, France, Italy, and Spain. But numerous other countries arrived there before us. America adopted the 19th Amendment in 1920, a time of massive change and growth worldwide— beginning with the industrial revolution, moving through WWI, and onward. Here are 15 countries that gave women the right to vote before the United States did.

Suffragette Kate Sheppard led a campaign to collect the signatures of nearly a quarter of the New Zealand's adult female population. This monumental effort resulted in a new law in 1893, making New Zealand the very first self-governing country to allow women to vote at the highest level of government alongside men. It also earned Sheppard a place on today's New Zealand $10 note. If her name is new to you, discover these other 9 incredible women you didn't learn about in history class.

In 1906, Finland became the first country where women could not only vote but also run for office; this universal suffrage meant that Finland was the first country to obtain genuine democracy. It may have been Finland's less urbanized and industrialized culture that helped lead to earlier women's suffrage: Finnish men and women shared equal work on farms, and even the upper classes needed most of their women to work in some capacity. Another fun fact: Finland was the first country in the world to elect a woman to office in 1907. Learn about 57 other trailblazing females who made history.

Following in New Zealand's footsteps, the Women's Suffrage League in South Australia joined several other organizations to collect over 11,600 signatures on a petition that measured about 400 feet long when the pages were glued end to end. South Australia gained women's suffrage in 1894, paving the way for Australia's Commonwealth Franchise Act in 1902, which laid out the criteria of who could vote—and women were included. Australia's colonies followed suit until by 1908 all six colonies had also given women the right to vote. With one exception: Unlike New Zealand, Australia did not include aboriginal women—or men—until several decades later.

Activist Gina Krog led the women's suffrage movement in Norway. Krog helped bring about a law in 1901 that allowed some women the vote, but only if they, or their husband, paid enough in taxes. Another law in 1907 allowed more women to vote, but only under special conditions related to property and income. Norway became the second country (after Finland) to elect a woman in 1911, and finally achieved universal suffrage in 1913. Gina Krog was, in essence, Norway's Susan B. Anthony.

Women's suffrage arose in Denmark's parliament in 1886, but it applied only to tax-paying women who lived in Copenhagen. Afterward, Danish women created the Women's Suffrage Association to further the cause and finally won voting rights for all women in 1915. Despite being among the leading nations in women's suffrage, Denmark today has actually been called the least feminist nation in the world.

In early 1917, Russia's new provisional government had their plans printed up in newspapers. Those plans did not include women's suffrage,  and this inflamed women's passions across the country. In response, the Russian League of Women's Equality led a march of around 40,000 women through the streets of St. Petersburg, including two orchestras and a band of women dressed as Amazon warriors. They demanded negotiations, and after meetings late into the night, they won their right to vote. The event ranks right up there with these 13 moments that changed women's history forever.

Lithuanian women won their right to vote in 1918, thanks to the tenacity of suffragettes  Felicia Bortkevicius, Liuda Purenas, Birute Grigaitis, and Emilija Supad-Gvildys. The four attended the Lithuanian Conference in St. Petersburg (then called Petrograd) in 1917 and went on to fight for women's suffrage. Lithuania is so proud of its feminist legacy that in 2018, to celebrate 100 years of the women's vote, the country installed crosswalk lights with female stick figures instead of male. Following in the footsteps of the world's founding suffragettes, these inspiring women are changing the lives of women across the world today.

Canada approached suffrage in smaller steps than other countries. Canada's first move towards women's suffrage in 1917 only allowed votes from war widows or from women with husbands or sons serving in the military. A 1918 law removed previous restrictions, but still excluded aboriginal women. At the time, the country wished to remain a "White Settler" land and the government believed that by extending political rights to white women, the country would be further protected from racial denigration. Suffrage was finally expanded in 1950 to include Canada's indigenous people.

Like most countries involved in WWI, Austria saw its women filling out the workforce while its men were off at war. When the war ended, Austria's monarchy fell, and the new Austrian Republic was formed in a social climate where it was "virtually impossible to further deny women the right to vote," according to the Austrian Embassy. For many early years after suffrage in 1918, women's votes were counted, but they were also monitored. In order to distinguish women's votes from men's, they were kept in different colored envelopes.

Women in Latvia gained their right to vote when The Republic of Latvia was founded in 1918, the country having previously been a part of Russian territory. Not only did Latvia's new government allow women to vote and serve in office but also ensured a minimum percentage of representation. The new communist regime implemented quotas so women would make up about a third of all elected officials.

Women's suffrage in Georgia was another product of the end of WWI. Georgia became independent of Russia in 1918, and like Latvia, its new government allowed for women's votes… however, Georgia's independence only lasted three years. It wasn't until Georgia was incorporated into the Soviet Union in 1921 that women again had the right to vote; thankfully there were no further steps backward.

German activist Clara Zetkin, a close personal friend of Russian revolutionist Vladimir Lenin, fought against WWI by cofounding the first international women's conference. Her fight culminated in the "Electoral Law of the Empire," providing universal suffrage in 1918. For Clara, the importance of women's rights was heightened by war. She is quoted as saying, "When the men kill, it is up to us women to fight for the preservation of life." Here are 14 additional early feminist quotes that still resonate today.

Polish women started out ahead of much of Europe when it came to equal rights. For example, in 1897 women were admitted as regular university students along with men. So when the country passed a decree in 1918 to allow women to vote, the country also became among the first in Europe to allow women to hold public office, as well. Poland's first female senior administration official Irena Kosmowska began her service the following year, serving from 1919 to 1930.

Hungary is unusual among European nations in that there wasn't a clear suffragette movement, but rather a feminist movement that led to women's rights in general. In particular, Blanka Teleki and Klára Leövey worked to build a girls' school in the mid-nineteenth century, before education for women was generally considered acceptable… and they served several years in prison for it. Once the battle for women's education was underway, women's right to vote was included in the broader feminist movement. As in so many other European countries, Hungarian women's suffrage came to fruition in 1918, with the end of WWI.

Estonia's perhaps greatest heroine in the fight for women's suffrage was Lilli Suburg, who founded a school for Estonian girls in 1882 and later founded Estonia's first women's magazine. The magazine, Linda, included articles promoting women's suffrage, some written by Estonian feminists and others translations of articles by international feminist leaders. Estonia practiced equal voting rights in 1917, saw those rights made official when the country gained independence in 1918, and then in 1920 held its first parliament elections where two women were elected to serve. Fast-forward 101 years and even with the right to vote, women still aren't equal to men in these 16 ways.

15 Countries That Gave Women the Right to Vote Before the United States Did, Source:https://www.rd.com/culture/countries-gave-women-right-to-vote-before-u-s/