I Rehomed My Dog—And I Don’t Regret It 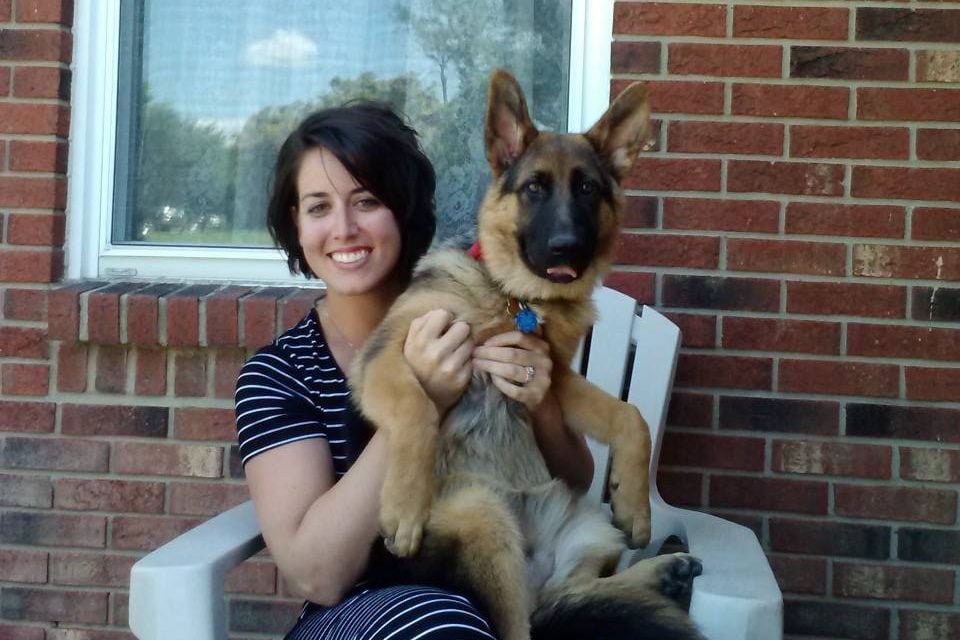 I remember the first moment I saw our floppy-eared German Shepherd puppy. I had a new husband, a new job, and a new house with a yard finally big enough for a puppy to run around. I remember our idealistic visions of life with a picket fence and evening walks around the neighborhood, and young kids playing out back with our dog. I also remember the first moment I realized we'd have to rehome our dog "Lady," who we'd all come to know and love through five years and three children.

What I didn't know was that I'd be joining the 6.1 million households in the last five years, who make the insanely difficult decision to rehome a pet, according to the American Society for the Prevention of Cruelty to Animals (ASPCA). In their study about rehoming pets, this amounts to about 6 percent of households, most of whom had to rehome due to "pet problems" including behavior and aggression. I also had no idea that I'd become enemy number one to the people my husband now begrudgingly refers to as "the dog people." Having both grown up loving and caring for dogs, we are definitely dog lovers, but the "dog people" are on a different level, we'd come to discover.

Our puppy was adopted from a breeder after we did extensive research on quality and ethical breeders in our area. She was always a bit wild, but we assumed that's "what we asked for" when we bought a 12-week-old dog. A few major pieces of furniture and a couple of new rugs later, she was trained through extensive behavior classes and on her way to being everything we pictured. I distinctly remember trying to teach my 100-pound dog to heel with a newborn in the carrier and a large spoonful of peanut butter on a ladle in my hand per the trainer's recommendations. I also remember the first time I got a newborn to sleep and couldn't control my dog's barking—these tips on winning the barking battle could have helped me back then.

Getting serious about intervention

The barking and mild aggression didn't stop. For years. Did you know a dog psychologist is a thing? Neither did I, until I hired one. Basically the female, suburban version of Cesar Milan came to my house. In the meantime the dog terrified the cat, cornering him into tiny nooks and barking until the cat had accidents around our new house. She barked through nap time, daytime, when I walked up the stairs, when I used tin foil (the reflection maybe?), and pretty much when anyone entered or left a room. She wanted to go out, but couldn't stay out long or the neighbors complained. She couldn't stay in either, as she knocked over my 80-year old grandmother at Thanksgiving. We resorted to medicine at the recommendation of the vet, which seemed to have as much of an effect as asking a bull to calm down. Once she got into such a tizzy that she backed into the bathroom vanity, detaching it from the bathroom wall. She spent a solid six months attacking the same tree in our yard. We resigned ourselves to the idea that she was "unwell," in multiple senses of the word.

I started to research and reach out for support about our "issue." Family members would coo over our "sweet dog" and say things like "well she needs more exercise" and "enroll her in an agility course" and "you should go to puppy daycare," to which I usually politely nodded while protesting inside (OK, and sometimes out loud) "I have three kids. Two jobs. The dog runs two miles a day. How much more can I give her?" I discounted the toll she was taking on my parenting. I'd act frustrated with my kids but in retrospect, it was five years spent in frustration at an animal. I started to resent being at home, especially alone. I resented not being able to wrap leftovers in aluminum foil in peace, to have a calm conversation with my husband in peace after work, or to welcome visitors. I found myself telling friends who were having their first baby, "Don't worry, babies are easier than puppies." Easier than puppies? Really? I realized this had to be an unhappy dog, but I'd tried everything I, my trainer, my vet, the dog psychologist, and various onlookers and advice-givers suggested. I gave away my cat and lost out on what should have been peaceful moments, too many times to count, with my children for this pet.

Weighing the pros and cons 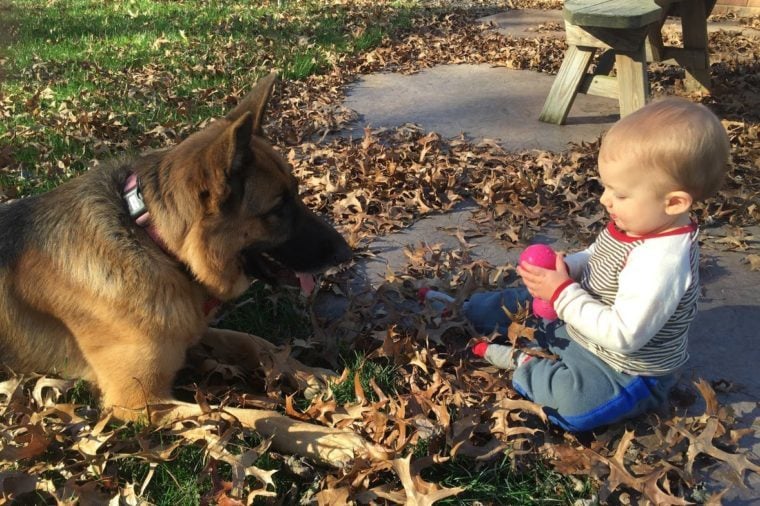 The first time the decision to rehome came up was after a vacation in which we had decided to leave her at the doggie vacation spa an extra night to "settle in" at home. Other dog owner friends I knew couldn't wait to get back to their furry family members, but I was disconnected and full of dread. That first night without her was life-changing. For two more years, we considered the idea off and on but feared judgment from "the dog people," family members, and ourselves. After all, we had chosen this dog. Wasn't she our problem forever? Were we really about to become "those people" who gave up when it got hard?

The other difficulty dog parents grapple with when deciding to rehome is that it's not usually all bad. Likewise, we had some solid memories of Lady playing with our toddlers in the backyard, going trick or treating, and even a moment when she saved us all from a rabid animal that tore into our yard on a mission. We often thought that we could never give her away because we had such fond memories of her swimming at the dog lake, and playing keep-away with her fetch ball. But yet, the thought was still there.

The last straw, or piece of cheese

Our dog had never shown true aggression toward anyone and had been through anti-aggression training exercises as a young puppy to get her used to children, others eating food in front of her, and similar situations. Then one day, she took a block of cheese—the Costco-sized one—from the counter, and I reached to take it back (I'd often retrieved something she "borrowed" without incident), but this time she came at me. She lunged, growled, tried to bite me, and the hair on her neck stood up as if I was the enemy. With adrenaline pumping, I gathered my kids and left my own house, not sure what to do. In the next two days, she did the same thing to my husband, and got into a stomping fit near my four-month-old baby son, nearly crushing his neck. I wasn't ready to wait for what would be next. It was time.

A lack of options

Were we really the breeder-buying animal parents that end up passing their dog along to a shelter? Where would she even go? After some light research and a few phone calls, our fears were confirmed: not only was there nowhere safe and loving for her to go but the "dog people," especially at dog rescue programs, had vicious comments. We actively sought out someone who knew how to deal with animals in her situation. A shelter wasn't an option for us, and German Shepherd rescues wouldn't accept dogs who had shown such aggression.

By an actual miracle, a K9 police trainer contacted us after I posted on social media, looking for a dog to have at his home to replace one of his who had passed away. He wanted to train my dog with his K9 unit and keep her at home with him. I was so relieved I cried, not for the dog I sadly had come to resent, but from the weight lifted that I had to fix her for my family's sake. Then I cried because I wasn't crying about missing her. I cried for my husband who spent lots of time with her and my small sons who had learned to love and respect animals in spite of her antics.

After a few very sad days, I found a picture of my kids' hero, Chase the police dog from Paw Patrol, and convinced them she had gone on to become Chase. Then, I began to rebuild my life. For a week I spent a lot of time vacuuming dog hair from every crevice of my house (check out these top vacuums for dog and cat hair). I reluctantly donated her dog accessories and leftover bones to a neighbor, and slowly broke the news to all of our friends and family who loved her. I felt myself justifying to them the decision, even though it was right for us. (Many of them hadn't realized the extent to which the cute dog they visited at family dinners was wreaking havoc on our day to day survival.)

Why was I changing who I was to avoid judgment on this topic? Because the topic of rehoming is so taboo in our dog-loving culture, that I'd almost sacrificed the health, happiness, and safety of my family. When the "dog lovers" asked how I could bring myself to do it, I firmly replied, because my family is worth it. Maybe I made a mistake when I got her, but keeping her would have been a second one. I slept through the night for the first time in five years the night her new owner came to pick her up and awoke to the sounds of my children playing peacefully in their bedrooms.

Before you adopt a dog from a breeder or a shelter, consider these 20 points first to make sure the pup is a good fit for your family and lifestyle.

I Rehomed My Dog—And I Don't Regret It, Source:https://www.rd.com/advice/pets/rehomed-my-dog/