For most of us, waking up every now and then with a bug bite after a good night's sleep is completely normal. Typically, we chalk it up to being from a house spider, maybe a mosquito who snuck in through the window during the warmer months, or (worst case scenario) it could even be bed bugs. But if you've ever seen a cockroach make its way into your home, you've probably wondered: could a cockroach be to blame for your bites?

Roaches are never welcome guests in a home, especially considering how invasive they can be. "If you are seeing them and it's daytime, you probably have a much bigger infestation than you realize," says Scott O'Neal, PhD, an urban entomology researcher at the University of Nebraska.

But before you start worrying about an infestation—and whether those roaches are to blame for any bites you find popping up on your body—it's important to first identify whether the insects you're seeing are actually cockroaches. 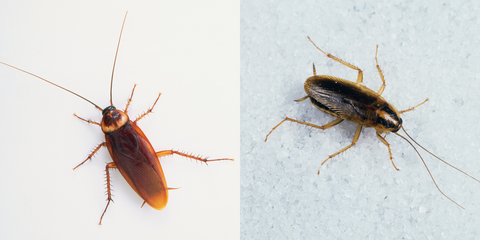 Although there are different types of cockroaches, they all have certain similar characteristics. "They're all typically flat and oval-shaped if you just look at them from above," says O'Neal.

Cockroaches are usually reddish-brown in color and have three main body parts: the abdomen (which is the back of the roach), the thorax (which is where the legs and wings are attached), and the head (which is where you'll find the eyes and very long antennas). If you're struggling to identify a roach, one thing that sets them apart from other insects is the inability to see their head. "The head is tucked underneath," says O'Neal.

Do cockroaches bite humans or pets?

As annoying as cockroaches might be, here's some good news: They won't bite you or your pets. "They don't have any reason to," says Dini Miller, PhD, professor of urban entomology at Virginia Tech and Urban Pest Management Specialist for the state of Virginia. "Their mouthparts just cannot pierce human skin."

In fact, cockroach "bites" on humans have only been recorded a few times throughout history. One was in former Soviet Union hospitals where people had severely open wounds that German cockroaches would feed on. Another was when cockroaches were being transported on slave ships and were allegedly biting people's toenails in that environment. "But a lot of these types of reports are very anecdotal and unsubstantiated," says Coby Schal, PhD, who heads the Schal Lab at North Carolina State University, which focuses on the study of cockroaches.

Finally, the most recent documentation of cockroach "bites" has been in low-income housing where babies go to sleep at night with food remnants on their mouths, which the cockroach might crawl up and start trying to eat. But even in those cases, documented is the key word, as these instances have not been viewed, says Miller. "That's as close as it gets," she says. "There's no cockroach that's going to come out and bite you."

But do cockroaches carry and spread disease?

Even if cockroaches don't bite you, they can still harm you, both directly and inadvertently. First, cockroaches carry a lot of microbes on them and within them in their gut and digestive system, says Schal. Eventually, the roaches will defecate those microbes. And while some of these microbes are totally harmless, others can be pathogenic, which means they have the ability to cause disease. While there isn't a ton of evidence to link roaches to specific disease outbreaks, the pests have been found to carry salmonella and the polio virus, per the Centers for Disease Control and Prevention.

So if the cockroach was exposed to something like MRSA—a multidrug-resistant bacteria—that could be a huge issue. "If that is transmitted to our food and ultimately to humans, that can create a very substantial health risk," says Schal.

Fact: Cockroaches produce a lot of allergens, many of which impact humans.

Another problem? Cockroaches produce a lot of allergens, many of which impact humans, says Schal. That can be harmful because if you've been exposed to these allergens before—which is particularly common in low-income housing—subsequent exposure might trigger an asthmatic response. "It can be very severe, and can even result in anaphylactic shock," says Schal.

How to safely get rid of cockroaches

The best way to get rid of cockroaches is by using cockroach baits, which are gel formulations that come in 30-millimeter syringe tubes. And lucky for you, you can find them at your local hardware store or supermarket, and they won't cost you more than a few dollars. "With literally $5 or maximum $10, you can eliminate an infestation in the home," says Schal.

Max Roach Killing Gel for Indoor and Outdoor Use

Simply put dabs of the bait—ideally on 2-inch squares of wax paper, which protects the bait from other insecticides—in areas where you've seen cockroaches appear. Most likely, that'll be in your bathroom or kitchen, which is where cockroaches are most commonly found.

"At night, cockroaches come out and they go, 'Wow, what a smorgasbord; this is great,'" says Schal. "And they start eating this bait, the bait contains an insecticide, and the insecticide kills the cockroach. That's extremely effective."

At the end of the day, while cockroaches are certainly a nuisance, you can rest easy knowing they won't bite you—and they can be nixed from your life with just a bit of work on your end. For a full step-by-step plain, here's our full guide on how to get rid of cockroaches.

Like what you just read? You'll love our magazine! Go here to subscribe. Don't miss a thing by downloading Apple News here and following Prevention. Oh, and we're on Instagram too.

Brielle Gregory Brielle Gregory previously worked at Men's Health magazine, where she reported, edited, and fact checked all things health, nutrition, and weight loss related; she currently spends her time digging into similar topics as a freelancer writer and editor.

Cockroaches Don't Really Bite—But They Can Make You Sick if You Don't Get Rid of Them, Source:https://www.prevention.com/health/a29493849/do-cockroaches-bite/