I Joined Weight Watchers at Age 12. Here’s Why Their Kurbo App… 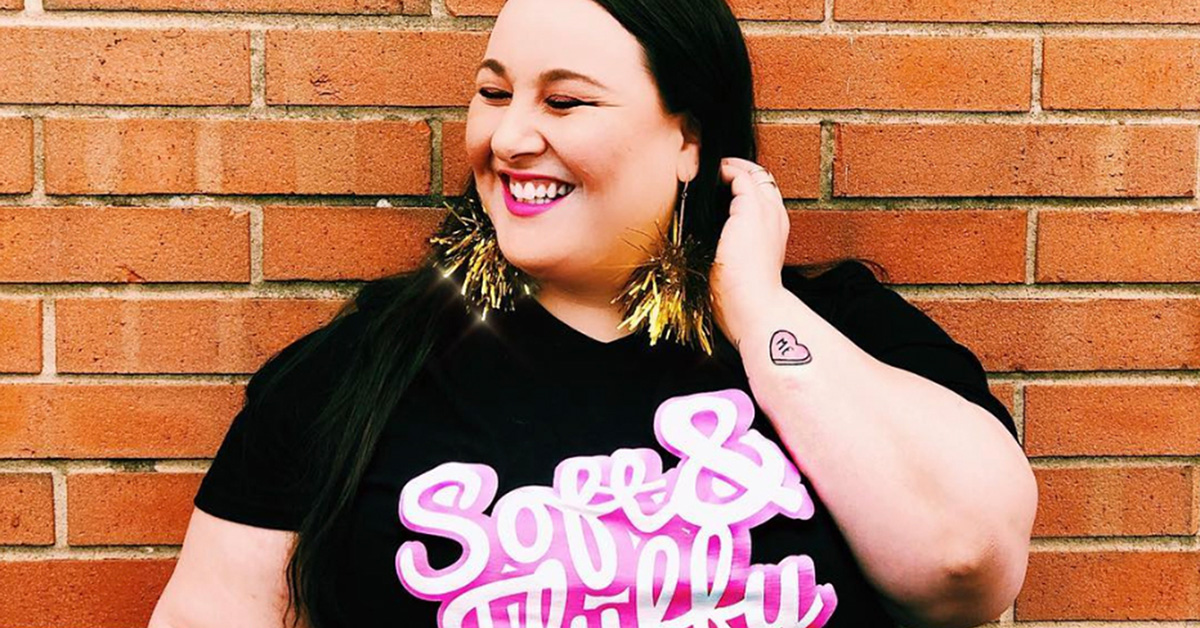 Last week, Weight Watchers (now known as WW) launched Kurbo by WW, a weight loss app designed for children 8 to 17 years old. In a press release from the brand, Joanna Strober, co-founder of Kurbo, describes the app as "designed to be simple, fun, and effective."

As an adult who started Weight Watchers at the age of 12, I can tell you there's nothing simple or fun about the eating disorder I developed — and that I'm still in treatment for nearly 20 years later.

I was 7 years old when I first became aware that my body was not considered acceptable by society's standards.

I remember learning that your age and your size were supposed to be around the same number, and also distinctly remember wearing a pair of jeans without taking the "size 12" sticker off.

This moment at the age of 7 sticks out because I can still feel the sting of my classmates teasing when they pointed out the tag and snickered.

What I understand now — that I certainly didn't know at the time — was that my body was never the problem.

A society that tells us that health and wellness can be defined universally based on numbers on a chart without any consideration of individuality is the issue. And a society that hates "fat" bodies simply for existing doesn't help either.

I wanted to look like everyone else. My solution? Lose weight.

I didn't come up with this on my own. At every turn, weight loss was touted as the pathway to happiness and I ate that lie right up.

Corporations invest a great deal of marketing dollars into perpetuating the idea that weight loss equals happiness. This belief keeps the weight loss industry in business.

The belief that diets are effective keeps the weight loss industry in business — but the reality paints quite a different picture.

An older study of adults ages 20–45 showed that over the course of 3 years, only 4.6 percent of participants lost weight and didn't gain it back.

In 2016, researchers following former "Biggest Loser" contestants found that the more weight a contestant lost, the slower their metabolism became.

Weight Watchers is one giant cog in the diet industry machine. The app is free but they encourage the use of the app's consultation feature, a $69 a month service which pairs the child with a "coach" who video chats with them once a week for 15 minutes.

WW isn't about wellness or health; it's about the bottom line

Millennials are now considered the "future generation of dieters."

What does this mean? Millennials are now the parents of young children and the younger you hook someone into diet culture, the longer you can take their money.

Weight Watchers is now being called WW. The 30-minute weekly meetings have been replaced with 15-minute virtual coaching sessions. Instead of assigning point values to food, Kurbo categorizes food as red, yellow, or green.

The packaging of this message may have changed, but at its core Kurbo is promoting what Weight Watchers always has: food has a moral value.

"WW has described the app as a 'holistic tool,' not a diet, but the way it's been branded doesn't change the effect it could have on its users," writes registered dietitian Christy Harrison.

"Programs like this are fertile ground for disordered eating, encouraging kids to track what they eat using a 'traffic light' system that divides foods into red, yellow, and green categories, implicitly coding certain foods as 'good' and others as 'bad,'" she continues.

The weekly meetings consisted of mostly middle-aged women, but my experience as a child on Weight Watchers is certainly not unique.

The Weight Watchers that I was on at the time was a points system, which assigns numerical values to foods based on portion size, calories, fiber, and fat. You were to keep a daily journal of everything you ate with the point value.

The mantra 'if you bite it, you write it' was reiterated every meeting.

You were assigned a set total of points to eat each day based on weight and gender. I distinctly remember someone telling me that I got 2 extra points per day because I was under 15 and my body was still developing.

I think I was supposed to use those 2 points to drink a glass of milk each day, but certainly no one ever noticed that I never did that.

All that anyone at Weight Watchers ever noticed or cared about was the number on the scale.

Each week, my weight went down but not because I was eating more fruits and vegetables. I had figured out how to be successful by Weight Watchers standards without drastically changing what I ate.

Because I didn't want my friends at school to know I was on Weight Watchers, I memorized the point values of what I liked to eat for lunch.

I had a small order of fries for lunch almost every single day I was on Weight Watchers. It was 6 points. I swapped regular coke for diet coke which was zero points.

I learned virtually nothing about food beyond how many points they were. My life became an obsession of counting points.

Weight Watchers also had a method of calculating exercise into points you could eat. Do a mild workout for 45 minutes and you could eat 2 more points (or something like that).

I had a lot of trauma around movement so I focused only on eating the set amount of points I was given. Much like the daily fries that I logged in my journal, no one seemed to notice that I never did any kind of exercise. They frankly didn't care. I was losing weight.

Every week as I lost more weight, the group cheered for me. They gave pins and stickers based solely on pounds lost. They assign everyone a goal weight based on their height. At 5'1", my goal weight was somewhere between 98 to 105 pounds.

Even at that age, I knew that range wasn't realistic for me.

I asked my Weight Watchers' leaders if I could change what my goal weight should be. After all, I wanted the ultimate Weight Watchers prize: Lifetime Membership.

What does Lifetime Membership entail? A keychain and the ability to come to meetings for free as long as you're within TWO pounds of your goal weight. Keep in mind that the average adult's weight fluctuates up to 5 or 6 pounds per day.

With a note from my pediatrician, Weight Watchers allowed me to make my goal weight 130 pounds. It took weeks of gaining and losing for me to reach that weight.

My body fought me and I refused to listen

I continued to count and bank points with fervor. When I finally reached my goal weight, I made a little speech and got my Lifetime Membership keychain.

I never weighed 130 pounds (or even within 2 pounds of that) again.

I genuinely believed that losing weight was the answer to all of my problems, and when I reached that goal weight, nothing in my life had drastically changed except my appearance. I still hated myself.

In fact, I hated myself more than ever. I had reached my goal weight but I knew I could never reach the 98 to 105 pounds that they (Weight Watchers and society) wanted me to be.

Looking back at pictures of myself at that time, I can visibly see my insecurity. My arms were always crossed to hide my stomach and my shoulders were always pulled inward. I was hiding myself.

I can also see now how sick I was.

My face was gaunt. My once thick curly hair fell out. The whole texture of my hair changed and has never returned. I still feel insecure about my hair to this day.

Over the course of 10 years, I gained all of the weight I had lost back and then some. I continued to go back to Weight Watchers every few years until I discovered body positivity and fat acceptance in my early 20s.

The idea that I could be happy in the body that I had changed my life. I no longer bought into the lie that losing weight would make me happy. I was my own evidence that wasn't the case.

I also discovered that I had an untreated eating disorder.

Years after my first Weight Watchers meeting, I still looked at food not as fuel, but as a reward. I disassociated while eating so I could eat more. If I ate too much, I was bad. If I skipped a meal, I was good.

The damage done to my relationship with food at such a young age has left a lasting impact.

Even with the help of a body positive nutritionist and therapist to learn to eat more intuitively, a knowledge of Health at Every Size, and years of working within the fat acceptance movement, unlearning what Weight Watchers ingrained in me has not been easy.

My heart breaks for the next generation of kids who now have even easier access to this dangerous message.

Instead of telling kids that foods are red lights, I urge parents to take a more personalized, neutral approach for their children.

Ask how the food makes them feel and why they're eating what they're eating. Practice mindfulness and seek out local Health at Every Size resources.

I don't blame my mom for taking me to Weight Watchers. I don't blame the leaders at the meetings for celebrating my weight loss without looking at how it was happening. I don't even blame my pediatrician that signed my goal weight letter.

I blame a society that values thinness as a prize unilaterally.

It's on all of us to help ensure that the next generation of kids not only has a more positive relationship with food, but doesn't grow up in a society that stigmatizes fat bodies.

Alysse Dalessandro is a plus-size fashion blogger, LGBTQ influencer, writer, designer, and professional speaker based in Cleveland, Ohio. Her blog, Ready to Stare, has become a haven for those whom fashion has otherwise ignored. Dalessandro has been recognized for her work in body positivity and LGBTQ+ advocacy as one of 2019 NBC Out's #Pride50 Honorees, a member of the Fohr Freshman class, and one of Cleveland Magazine's Most Interesting People for 2018.

I Joined Weight Watchers at Age 12. Here's Why Their Kurbo App…, Source:https://www.healthline.com/health/kurbo-weight-watchers-dangerous-for-kids