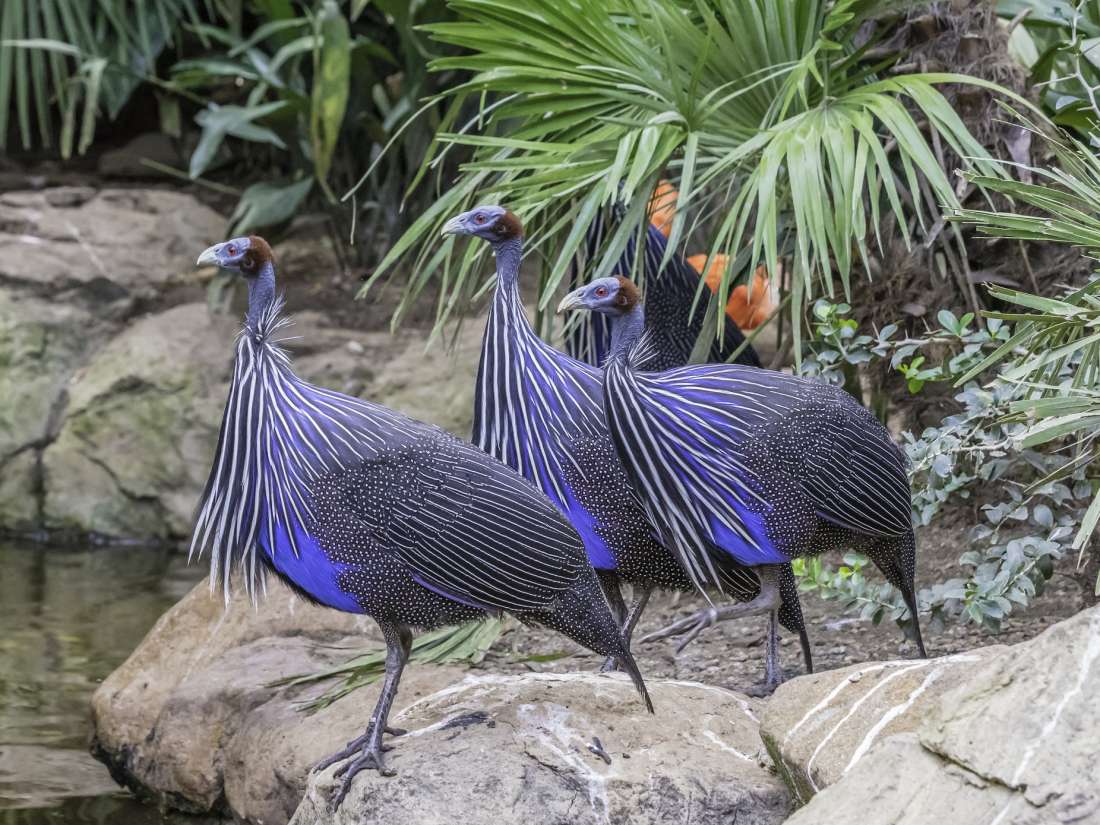 Zoologists have found that a species of small-brained birds — the vulturine guineafowl of Kenya — organize themselves in multilayered societies. This finding has made the scientists question previous assumptions about which animal species can engage in complex social relationships and why.

Humans form this type of society, and other mammals, particularly nonhuman primates, also do. Zoologists have also observed the formation of multilevel societies among elephants, zebras, giraffes, and whales.

These observations have led to an assumption that organization into multilevel societies is a distinctive feature of large-brained mammals. These complex structures require individuals to remember whom, exactly, they have formed ties with, as well as which groups they have associated and interacted with and under what circumstances.

However, a case study by researchers from the Max Planck Institute of Animal Behavior in Konstanz and the University of Konstanz in Germany now tells a different story.

A set of 'remarkable' behaviors

The investigators studied the behavior of vulturine guineafowl (Acryllium vulturinum). Although this is the largest known species of guineafowl, its members happen to have very small brains.

As part of their study — the findings of which appear in the journal Current Biology — the investigators observed a population of adult vulturine guineafowl birds at the Mpala Research Centre in Laikipia, Kenya.

The researchers tracked the activity of 441 individual members of this population over 1 year, which led them to some intriguing conclusions.

First, they observed the neat organization of the population into 18 different social groups with stable members. Then, they also saw that certain groups interacted on a preference-driven basis, especially during specific seasons and in particular locations.

These findings came as somewhat of a surprise because birds, even when they do form groups, do not stably associate with each other. Instead, they are typically very territorial and do not interact with other groups in a collaborative manner.

"[Vulturine guineafowl] seemed to have the right elements to form complex social structures, and yet nothing was known about them," notes the study's lead author Danai Papageorgiou, Ph.D.

"To our knowledge, this is the first time a social structure like this has been described for birds," she adds.

"It is remarkable to observe hundreds of birds coming out of a roost and splitting up perfectly into completely stable groups every single day. How do they do that? It's obviously not just about being smart."

"This discovery raises a lot of questions about the mechanisms underlying complex societies and has opened up exciting possibilities of exploring what is it about this bird that has made them evolve a social system that is in many ways more comparable to a primate than to other birds," he notes.

By approaching the issue in a different way, he goes on to argue, researchers may find how, exactly, complex societies have evolved throughout time in the animal kingdom.

"Many examples of multilevel societies — primates, elephants, and giraffes — might have evolved under similar ecological conditions as vulturine guineafowl," Farine speculates.