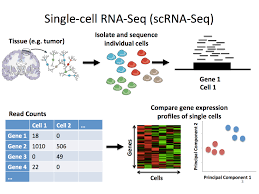 Single-cell RNA sequencing is expanding into the clinical setting (Haque et al. 2017). With the inherent complexity of NGS technologies, it becomes a challenge to acquire the laboratory and data analysis techniques necessary for NGS experiments. In scRNA-seq, researchers are taking steps towards improving the accessibility of scRNA-seq tools by providing resources that critically review the available technologies (e.g. Svensson et al. 2017). Some studies evaluate the available data analysis tools and provide insight into their strengths and weaknesses (Chen et al. 2019, Buttner et al. 2017). Numerous papers have been published that give explicit guidance in the workflow of scRNA-seq experiments (e.g. Haque et al. 2017). Below we highlight some of the steps involved in scRNA-seq analysis and some of the available reviews and resources that make scRNA-seq data analysis easier. have ma

Quality control is a critical step in single cell RNA-seq analysis since noise is generally higher than in other transcriptome analyses such as bulk RNA-seq (Chen et al. 2019). Quality control includes the identification and removal of cells with low quality. Different ways to identify and deal with low-quality cells have been evaluated (Ilicic et al. 2016).

The overall quality of scRNA-seq data is reflected in the ratio of reads that can be mapped. Much as in bulk scRNA-seq, scRNA-seq reads are generated in a fast format and can be mapped using the same mapping tools which have been critically assessed and reviewed (Li and Homer 2010).

Due to the inherent noisiness (from capture efficiency, sequencing depth, dropouts, etc) of scRNA-seq data it is imperative to normalize the data prior to any downstream analysis. Normalization allows for the removal of unwanted bias that may cloud biologically significant results. Normalization can be conducted between samples and within samples. The fore corrects for biases between gene expression levels and the later corrects for biases such as sequencing depth (Chan et al 2019). Wu et al. (2019) designed a matrix that evaluated 14 normalization methods in scRNA-seq and bulk RNA-seq.

Given the size of scRNA-seq experiments, experiments may be conducted in batches over different days and, in some cases, with different expertise. As a result, variations may appear as an artifact of Batch effect (Hwang et al. 2018). Batch correction techniques encompass linear models and near neighbor matching tools (Haghverdi et al. 2018). Batch effect correction methods have been critically evaluated (Büttner et al. 2017). Good experimental design and methodical execution can minimize the batch effect on the results.

In single cell RNA-seq data can have missing values and dropouts that result from failure to amplify some of the expressed RNA. This can introduce noise that causes false amplification in signal variations (Chen et al. 2019). In this case, bulk RNA-seq correction methods are not applicable, therefore scRNA-seq-specific methods have been devised such as RESCUE (Tracy et al. 2019) and scImpute (Li and Li 2018).

Single cell RNA-seq has been used to study cell developmental trajectories using a pseudo timeline. Since the same cell cannot be studied along a developmental timeline yet, cells are sampled along a timeline and then lined up in the order they were sampled in(Birnbaum 2018). There are many tools employed in single cell RNA seq analysis to infer cell trajectory, e.g. Monocle2 (Qiu et al., 2017) and DPT (Haghverdi et al. 2015). Trajectories and cell lineage inference tools have been critically assessed (Chen et al. 2018, Saelens et al. 2018).

To increase the accessibility and ease of single cell rna-seq analysis a number of pipelines and databases have been created for scRNA-seq studies. For example, Zappia et al. (2018) created a database that catalogs and annotates tools developed for single cell RNA seq analysis. Web servers, such as scQuery are readily available that enable identification of key genes, cell types, amongst other features (Alavi et al. 2018). Pipelines for scRNA-seq data analysis include Basepair's scRNA-seq pipeline, Seurat and SC3.

Given the inherent complexity of NGS technologies, transitioning techniques such scRNA-seq into clincal settings present some technical challenges related to the complexities involved single cell RNA seq analysis. The wide range of tools available have been critically reviewed and pipelines have been created that make embarking on scRNA-seq experiments much easier. The continuous innovations, a wide range of open-access tools and many online workshops make studying single cell transcriptomics more accessible. The advances in bioinformatics approaches are facilitating biological and clinical studies that continue to provide invaluable insights into gene expression and cell-to-cell heterogeneity.

How scRNA-seq analysis has made analyzing sequencing data an extremely easy task, Source:http://feedproxy.google.com/~r/findhealthtips/~3/FWwvwA5Q9do/