Uninterested vs. Disinterested: What’s the Difference? 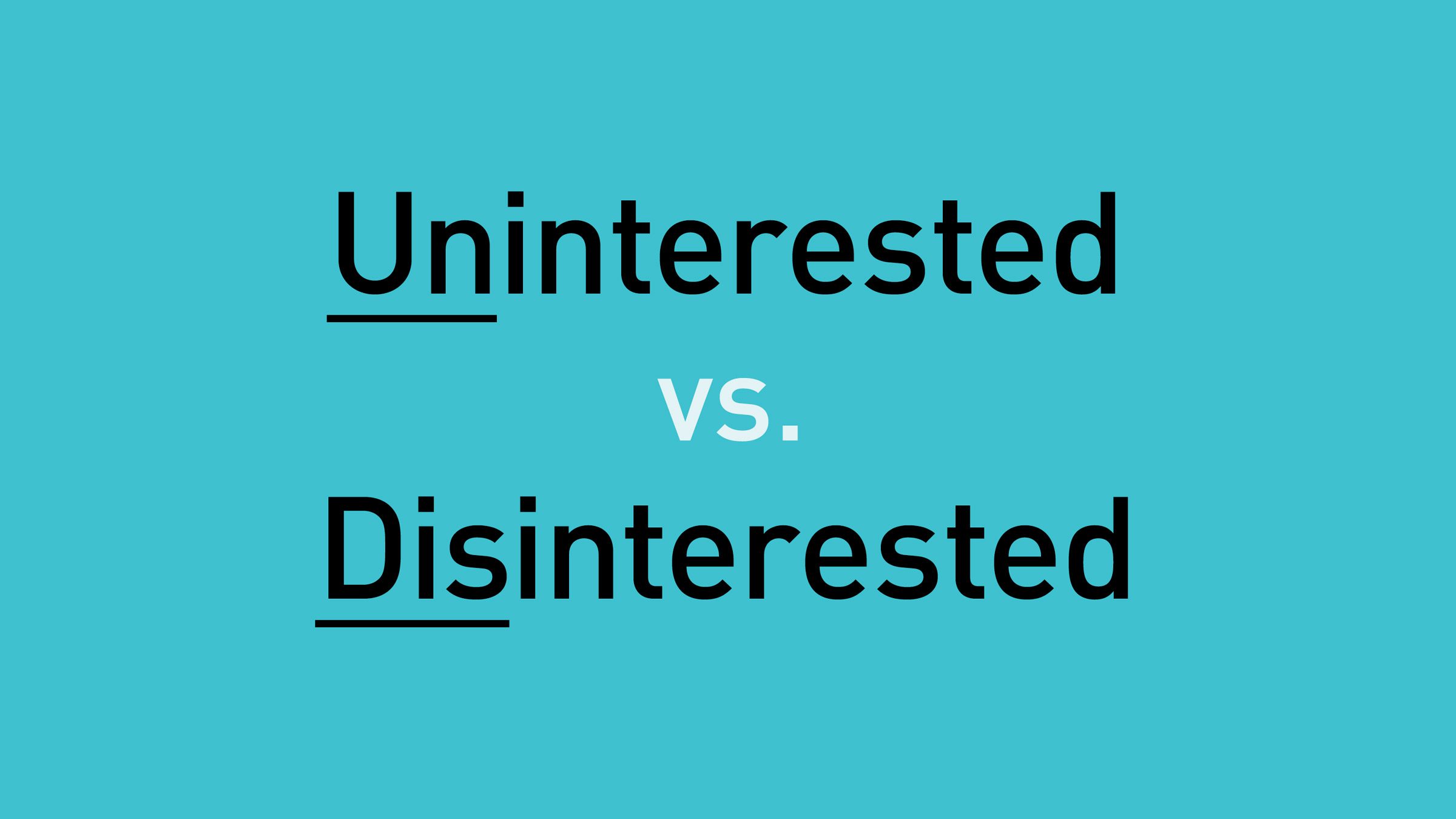 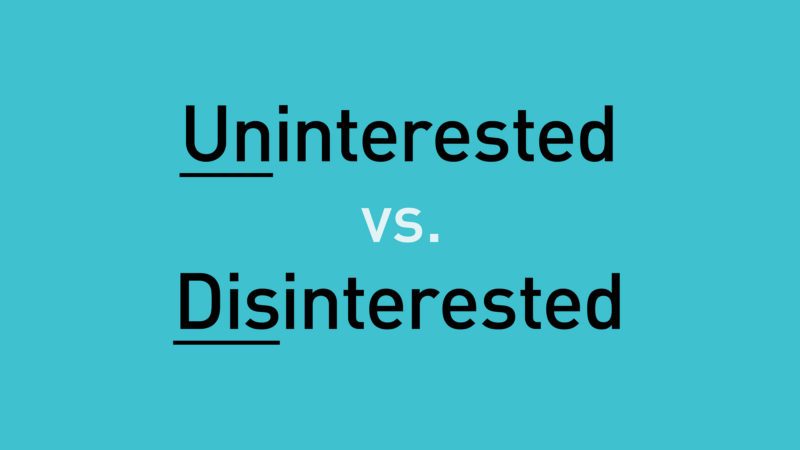 Do these words mean the same thing, or are they different? Well, both. Find out how to use them correctly.

If we were to ask you the antonym of "interested," which word might you choose? Would you go with "uninterested"? Or would you vie for "disinterested"? Perhaps you might think that the two words mean the same thing (or pretty close to it, so it hardly matters). Find out how to correctly use two other seemingly interchangeable terms while you're at it: each other and one another.

But don't be fooled! These two words are, indeed, two distinct words with distinguishable meanings—well, mostly. "Uninterested," as defined by the Oxford dictionary, means "not interested in or concerned about someone or something." It's what you might use to express a person's indifference. "Disinterest," as primarily defined by the Oxford dictionary, means "not influenced by considerations of personal advantage." To use this definition is to indicate that a person remains unswayed by personal bias or by thoughts of personal gain or loss.

Here are two sentences from Grammar.com which help to clarify the difference between uninterested vs. disinterested:

Now, if you scoffed at the original question, thinking the distinction between the two words obvious, here's evidence that the delineation is not as clear you think: the secondary definition of the word "disinterested" is "having or feeling no interest in something." In fact, Merriam-Webster's dictionary gives the definition above as it's primary definition of "disinterested," making it mostly interchangeable with "uninterested." Learn more about the nuanced difference between any time and anytime.

The interesting history of uninterested vs. disinterested

If that isn't convoluted enough, the history of the two words is much more tangled, and much more…ahem…interesting! Beyond the two words being interchangeable at many points throughout their existence, they once had the exact opposite meanings as today's definitions.

Merriam Webster's usage notes on the two words tell us that when "uninterested" first appeared on record in 1629, it was used to mean "unbiased"—what "disinterested" means today. This usage from 1629 was written by Walter Montague for his Shepheard's Paradise: "…and I have found here so uninterested a Counsellor, as he asks nothing but words to gratifies him…" This Counsellor requires neither bribes nor blackmail, making him uninterested in the eyes of the narrator.

And "disinterested," which appeared even earlier in 1612, was first used with the meaning of "not interested." Merriam-Webster's usage notes cite The Oxford English Dictionary, referencing John Donne's 1630's use of "disinterested": "If there be cases, wherein the party is dis-interested, and only or primarily the glory of God is respected and advanced, it [suicide] may be lawfull." Here, "disinterested" is used to indicate a person that is unengaged—lacking curiosity about or interest in the topic at hand.

Then, for some time, the words were defined and used interchangeably, before settling into the (mostly) distinct meanings they currently carry.

Who knows why usage of uninterested vs. disinterested has changed over time. Perhaps the prefix "dis" seems more active—as in the activity necessary to maintain an unbiased stance—and the prefix "un" seems more passive—as in when one remains unengaged and indifferent. Whatever the reason, the history is interesting, right? For another interesting usage history, learn more about the difference between then and than.

So what's the correct usage of uninterested vs. disinterested?

It is technically correct to use "uninterested" and "disinterested" interchangeably. But why wouldn't we embrace their different definitions in order to ensure our intentions are clear when we speak?

The two words were created for different purposes—and the distinction is important. Even if their original definitions are reversed from their meanings today, we should take advantage of the nuanced distinctions they offer.

If you find synonyms and antonyms…ahem…interesting, find out how the first Thesaurus got started.