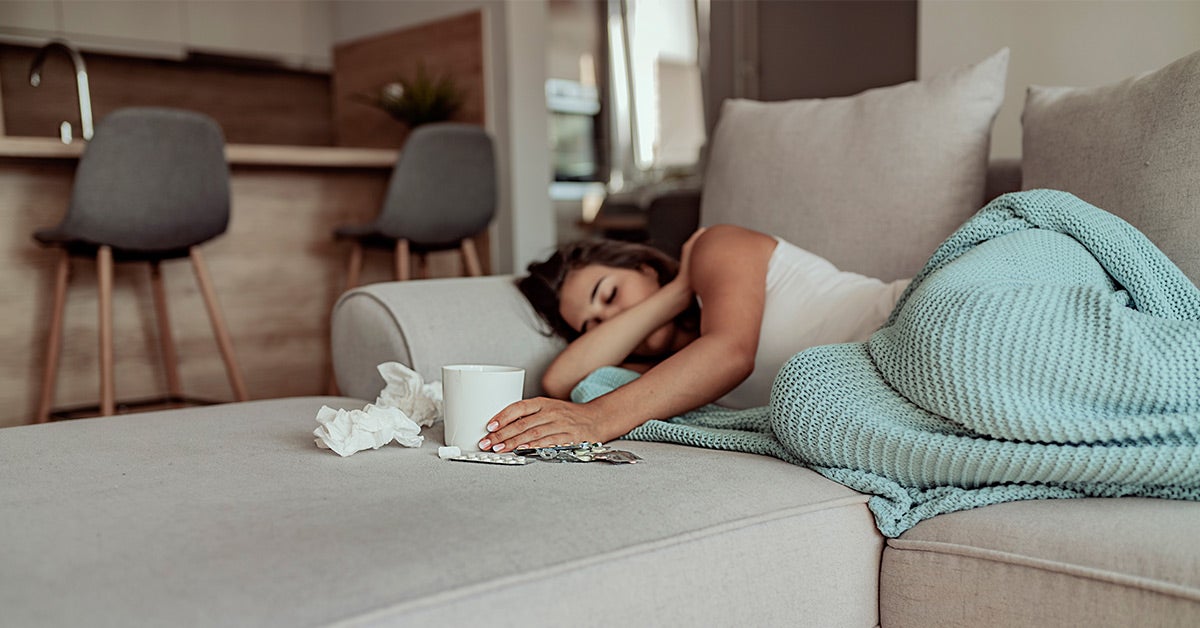 The flu season this year has been a been a particularly nasty one, starting earlier than it has in 16 years.

While the flu vaccine can reduce your risk and the severity of the illness if you do get sick, its effectiveness varies from year to year, and this year's vaccine has been a poor match.

Multiple strains of the virus are also hitting simultaneously this year, upping your risk of getting the flu more than once.

Despite the seriousness of this illness, many people don't take it very seriously, believing "lots of bed rest and drinking plenty of fluids" is adequate treatment.

But just curling up under the covers and waiting for your immune system to fight off the infection could result in the sickness lasting longer, being more severe, or in some cases, becoming deadly.

That's why even if you've had the flu shot or you've already gotten over an infection once this year, you should still see a doctor at the first sign of symptoms.

"We all have to remember that influenza can be a deadly disease," said Norman Moore, PhD, a virologist expert and director of infectious diseases for Abbott. "The U.S. Centers for Disease Control and Prevention (CDC) estimates that influenza can cause as many as 140,000 to 810,000 hospitalizations, and as many as 12,000 to 61,000 deaths, annually."

Flu deaths are already up 65 percent in 2020. Over the course of the current flu season, at least 6,600 people in the United States are dead (including 39 children) and at least 120,000 people have been hospitalized.

"We have 2 more months left in the peak of flu season," said Dr. Jessica Grayson, an assistant professor in the department of otolaryngology at the University of Alabama at Birmingham. "If you haven't been vaccinated, you still can and should."

It isn't always easy for doctors to just look at people and pinpoint what's wrong with them. That's why testing for various conditions can help narrow down the field of possibilities. And during flu season, rapid flu testing can help doctors to very quickly identify whether or not people have been hit by influenza.

"For many years, determining if someone had a bacterial or viral illness was something that could only be done with laboratory tests and specially trained technicians," Dr. Moore said. "But now, thanks to advancements in testing technologies, we've moved the process closer to the patient — in an urgent care setting, their doctor's office, walk-in clinics — and made it faster, easier, and more accurate than it has ever been before."

Moore explained that molecular flu testing allows providers to take a quick swab and get flu results back in a matter of minutes. This means people can quickly know for sure if it's the flu or not.

There's still a widely held belief that seeing the doctor is pointless when you have the flu. This belief has been perpetuated by the fact that in most cases, there isn't a lot doctors can do about viral infections, and influenza is viral. But it can be treated.

Prescription antiviral drugs exist that can help to eliminate the flu sooner and reduce the severity of symptoms. They are especially beneficial to those at risk of developing severe flu complications.

"There are four FDA (Food and Drug Administration) approved antiviral medications for treatment of the flu," Grayson said.

"These drugs have been shown to lessen length of illness but also decrease complications, including ear infection, respiratory complications, and hospitalization," she said.

If you're still inclined to wait out your illness, you may want to consider the fact that treatment only works for the flu if given early.

"Influenza treatment is only helpful if given within the first 48 hours of symptoms," Moore said. "If people with early flu-like symptoms decide to wait before seeing a doctor, they may miss their window for treatment."

Considering symptoms of the flu can persist for up to 2 weeks for some people, catching the flu can mean a lot of missed time from school and/or work, in addition to the risk of developing further complications.

Antivirals have been found to reduce the duration of illness by 1/2 to 1 1/2 days when given within the first 48 hours.

That's why Moore insists that seeing your doctor early can have an economic benefit.

"This means people can get back to work sooner, or have their child miss one less day of school," he said.

Antivirals can also be prescribed to other members of your family if one of you is diagnosed with the flu. Starting treatment after exposure and before symptoms begin has been found to be 70 to 90 percent effective at preventing the flu altogether.

For families with many children who tend to pass illnesses around, this is one option that could save a lot of time off school and work. And for those who have compromised immune systems or are at greater risk of developing flu complications, having a preventative option after known exposure could actually be lifesaving.

Antiviral treatments do come with drawbacks, and side effects can include nausea, vomiting, diarrhea, and bronchospasm, according to Grayson. For some people, particularly those who are not at high risk of developing additional flu complications, the medication side effects may not be worth shaving off a day or two of illness.

But even if you aren't interested in antiviral treatment, both Grayson and Moore agree you should still be seen.

"Seeing the doctor when you suspect you have the flu is important for a few reasons," Grayson said, providing these items to follow up on:

"Pneumonia can also look like the flu. If someone is coughing with a fever and it is not flu, the doctor may want to test them for pneumonia. If people with pneumonia assume they have influenza, they won't get the antibiotics they need," Moore said.

Considering pneumonia accounts for 1.7 million visits to emergency room departments and an average of 50,000 deaths a year, delaying treatment for that is also a mistake.

"The lesson here is that testing will help healthcare providers make better treatment decisions to get people feeling better sooner," he said.

Knowing whether or not you've contracted the flu can also help you warn others you've been in contact with, giving them a head start on treatment if they begin to develop symptoms, too.

So how soon after you notice flu symptoms should you call a doctor? "For influenza treatment, the sooner the better," Moore said.

According to Grayson, these symptoms warrant making that call:

But the greatest opportunity for preventing the development of the flu altogether still comes from getting your flu shot.

"One thing I stress to people is that if you don't care about influenza for yourself, still think of those around you," said Moore. "I get a yearly influenza vaccine more to protect my family, my workplace, and my community than myself. You don't want to be visiting an elderly parent or giving it to young kids who then may have a more serious illness."

He acknowledged that experts don't always know how well the vaccine will work from year to year, "but it is always safer to get it."

If you still get the flu, Moore said, "Go in to be tested and then stay home. You wouldn't want to have a co-worker infected with the flu come into the office and give the virus to you."

The same goes for sending kids to school with the flu. The CDC recommends staying home for at least 24 hours after your fever has subsided without using fever-reducing medications.

Why Seeing a Doctor Within 48 Hours of Flu Symptoms Is Critical, Source:https://www.healthline.com/health-news/think-you-have-the-flu-dont-wait-to-see-a-doctor