If Pork Could Talk, Here’s What It Would Tell You

It is my favorite episode of The Simpsons of all time. Homer is holding forth at his dinner table about the diverse deliciousness of bacon, ham, pork chops, and other porcine products.

"Dad, those all come from the same animal," his daughter says helpfully.

As is usually the case, Homer was speaking a fundamental truth to which he happened to be hilariously oblivious: I am pretty magical. For starters, my fellow pigs are as smart as most any dog, capable of being taught how to play video games. I also make a great pet that can live for 20 years.

But if eating me is the route you prefer, so be it. After all, I'm the sole farm-raised animal whose main purpose is to be food: I don't graze pastures, pull plows, lay eggs, produce drinkable milk, or make wool. Nearly every part of me is useful and succulent, and my range of flavors and textures is unrivaled.

No wonder I am the most-­consumed meat in the world—even as two major religions, Judaism and Islam, prohibit eating pork. The rest of you grill my chops, braise my shanks, cure my legs into hams and prosciutto, devour me in pâtés, fry my skin into crispy pork rinds, and so much more. I am the cornerstone meat of barbecue, my ribs and shoulders slowly smoked over hardwood until tender and flavorful. And then there's bacon, the darling of breakfast, burgers, BLTs, salads, and, let's be honest, pretty much anything else you put on a plate. Hungry yet?

My fat is arguably what makes me so extraordinary. It's saturated just enough to be solid yet silky at room temperature, making me perfect for chopping, mixing with seasonings and other meats, and curing into delectable sausages, terrines, and rilletts. In fact, it's the foundation of the whole centuries-old tradition of curing meat. Charcutiers can't produce quite the same sublime mouthfeel with beef, chicken, or game that they can with porky old me.

All this talk of fat might have you confused if you remember "The Other White Meat." This was the ad slogan developed in 1987 for the National Pork Board as a way of keeping me relevant during the anti-fat craze of the time. It worked: My U.S. sales grew 20 percent by 1991 as consumers began to view me as a health-conscious choice alongside white-meat chicken. I'm nonetheless considered red meat by nutritionists and the USDA—and always have been.

Here's the truth: Sometimes I'm healthful; sometimes I'm not. The Other White Meat campaign focused on my loin and tenderloin, those swaths of flesh along my spine that are quite low in fat and good sources of protein and minerals. But other parts of me, not so much. You'll find the fattiest slabs of fat on my belly, back (right on top of those lean loins), and jowls. Falling in between, fat-wise, are my shoulders and legs. Think of them as my dark meat, with fat interspersed with muscle as well as lots of connective tissue. That tissue—actually collagen that forms when a muscle is well exercised—may start off tough when it's raw or briefly cooked. But roast a pork shoulder for eight hours, and that muscly tissue will melt into succulent gelatin to produce a fall-off-the-bone pork juiciness that makes you humans fall off your chairs.
One thing everyone knows about me is that I am an insatiable omnivore, which means that those who raise me have the power to vary how fatty I am and how I taste simply by feeding me differently. Take the pata negra pigs in Spain and Portugal that spend their lives grazing on acorns. Their famous funky, translucent-­pink jamón ibérico (Iberian ham) is so rich in healthy monounsaturated fats—up to 55 percent, a higher ratio than in any other meat—that farmers call their hogs "four-legged olive trees." Such a privileged lifestyle and meals don't come cheap. These days, a 15-pound bone-in ham from the elite Spanish brand Cinco Jotas will stop your heart at $1,200—or $80 a pound.

Meanwhile, a conventionally farmed American pig fattened on run-of-the-mill grains and meal made from meat and bone produces pork that's higher in saturated fat but costs a mere $4 per pound.

There are few easier weeknight meals than a pork chop roasted in a cast-iron pan. But boy, do you Americans overcook me. Chops, lacking in fat as they are, dry out when they get too hot. For decades, the USDA made it worse by recommending an internal temperature of 165°F for pork, which delivers a very dry puck indeed. In recent years, they dropped it to 145°F, which is ­medium-well and a real improvement: juicy and just having lost its pink. Sink your teeth in and enjoy the magic. 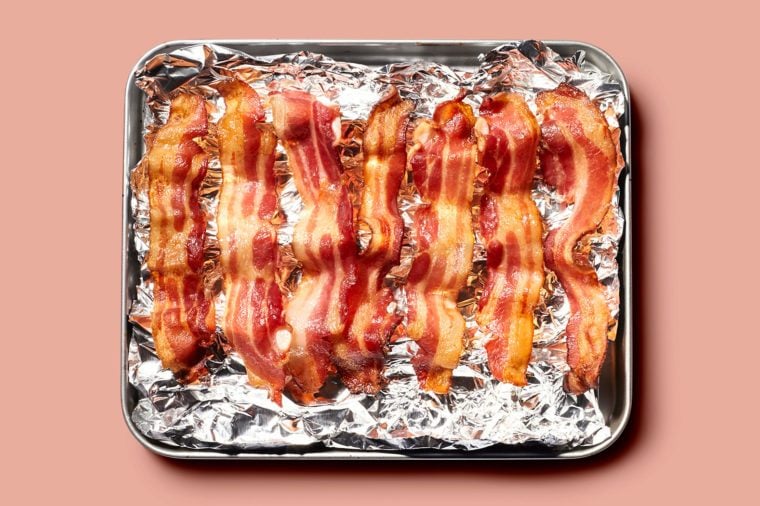 Joleen Zubek for Reader's DigestFor the tender version: On a rimmed baking sheet, set a wire rack or a large piece of ­crumpled aluminum foil into accordion­like peaks and valleys. Arrange bacon slices close together with no overlaps. Place sheet with bacon on the middle rack of a cold oven, then set to 400°F and allow to heat. Rotating the pan once midway, cook 15 to 25 minutes, depending on the thickness of the rashers and your desired done­ness. Transfer cooked bacon to paper towels to drain, then serve. For the shatteringly crisp-all-over version: Line a rimmed baking sheet with foil, only without the ridges, and follow the same cooking directions.

If Pork Could Talk, Here's What It Would Tell You, Source:https://www.rd.com/food/fun/if-pork-could-talk/