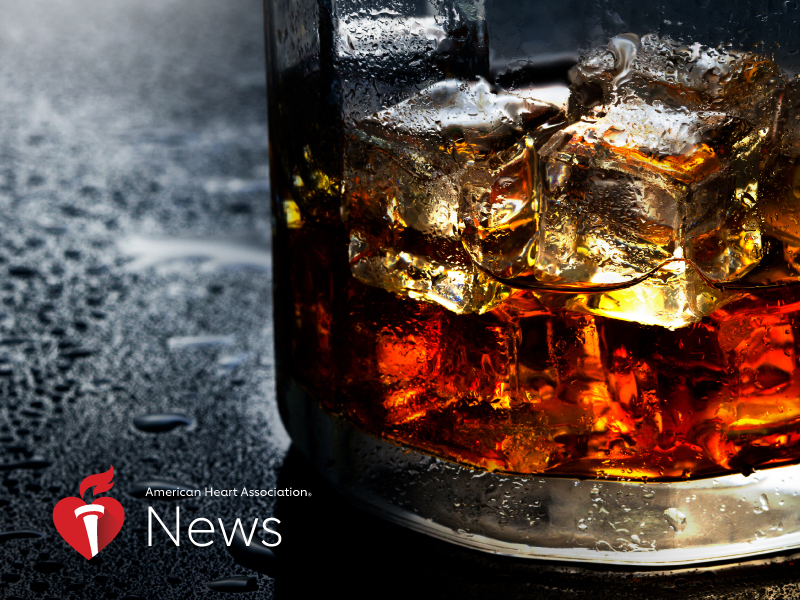 TUESDAY, June 16, 2020 (American Heart Association News) -- People who drink large amounts of alcohol have nearly fivefold odds of experiencing a potentially deadly type of stroke compared with those who drink very little or not at all, a new study finds.

But researchers didn't rely on people to self-report how much alcohol they consumed. Rather, they looked at blood concentrations of phosphatidylethanol (PEth), a biomarker reflecting alcohol consumption over the past month.

The study, published Tuesday in the American Heart Association's journal Stroke, included 277 middle-age men and women in Sweden. The odds of having an intracerebral hemorrhage, or ICH, during the 22-year study was nearly five times higher for those with the highest PEth blood concentrations than those with the lowest concentrations.

ICH is a type of stroke caused by a blood vessel rupture that leads to bleeding in the brain. The strokes occurred, on average, within seven years of the blood test.

PEth measurements don't indicate frequency or volume of drinking, only whether alcohol was in the system in recent weeks. Researchers used PEth results to divide study participants into groups: heavy drinkers, moderate drinkers and those who drank very little or not at all. For those who drink alcohol, the AHA recommends men limit it to one or two drinks per day and women one drink per day.

"We had expected that a high alcohol consumption would predict risk for ICH, but I was surprised at the magnitude of the increased risk," said the study's lead author, Dr. Kristina Johansson of Umeå University in Sweden.

"I was also surprised that the biomarker PEth was so much better at predicting risk for ICH, compared to alcohol consumption measured by questionnaire," she said.

"Patients tend to underreport how much alcohol they routinely drink," said Dr. Hugo J. Aparicio, an assistant professor of neurology at Boston University School of Medicine and an investigator with the Framingham Heart Study. He was not involved in the new study.

"This is a relatively small study, but their findings do confirm that high alcohol use is associated with a higher risk of ICH. As we move toward more personalized medicine, biomarkers may have a role in helping people assess their true risk," he said.

ICH is the second most common type of stroke in the United States, with an estimated mortality rate of about 40% within one month of the stroke. It also can cause severe disability in those who survive.

Johansson said using the biomarker in addition to asking patients about their alcohol consumption could give doctors valuable information about someone's disease risk.

"PEth analysis could be part of a regular health exam," she said, "where the health care provider could use the patient's PEth level as a starting point for discussing the possible implications of heavy alcohol consumption. It's important for both patients and health care providers when discussing lifestyle changes and when treating other risk factors for ICH, such as high blood pressure."

It is those doctor-patient conversations that are key, Aparicio said. "If you have a good relationship with your primary care provider, you might be able to have a more forthcoming discussion about your alcohol habits. A good interview and the time to have that interview are just as important."