Who vs. Whom: Here’s When to Use Each Word 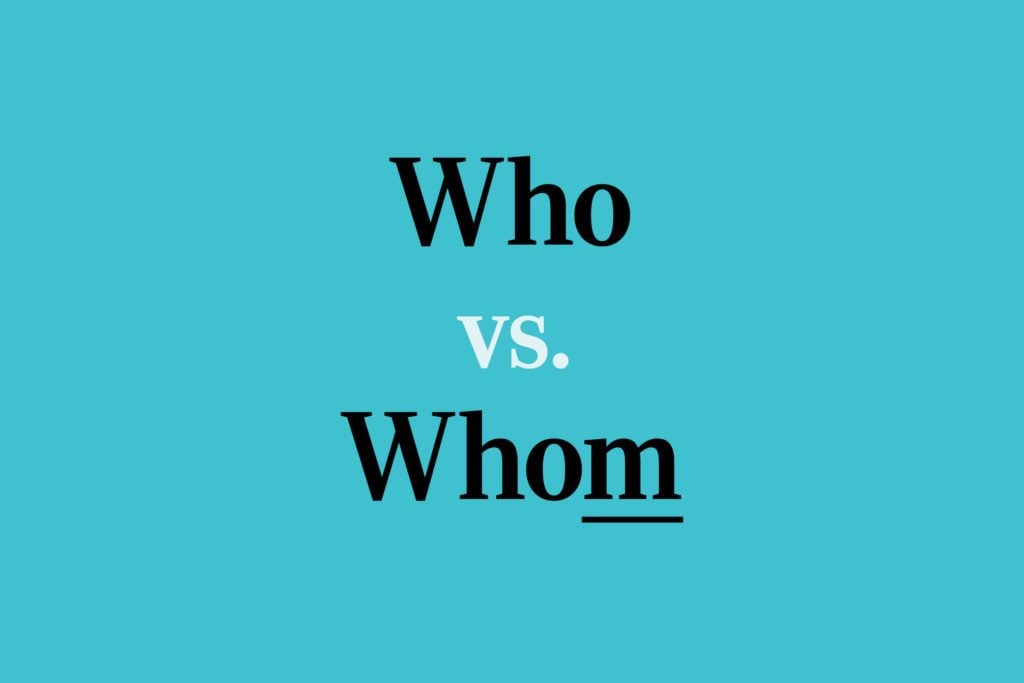 "Who" gets to have all the fun. "Who" gets to be on first. "Who" is responsible for letting the dogs out. Meanwhile, "whom" is sitting in the corner, being perceived as pretentious by plenty of English speakers.

But "whom" isn't neglected due to any fault of its own; "whom" is neglected because plenty of people just aren't quite sure when the time is right to use it in a sentence. It's confusing to figure out when "who" vs. "whom" is the right word to use, so it's a lot easier to just use the more common, straightforward "who" and call it a day.

But if you're curious about grammar, you've probably wondered when it's actually correct to use each one. After all, it's one of the grammar rules that'll make you instantly sound smarter. Now, with some help from Grammarly, we clarify the official "who" vs. "whom" rules.

What's the difference between "who" and "whom"?

Well, unlike plenty of other words that sound similar but mean totally different things, "who" and "whom" do mean virtually the same thing; it's just how you use them that's different. They're both pronouns used to identify or specify a person.

How to use each

So how does that work when you're composing actual sentences? Well, these couple of examples should help. If the person is doing or being the action, you should use "who." For instance, you'd say, "Who made this delightful crockpot lasagna?" or "Who is the man in this photo?" Furthermore, in a sentence like "I know who set off the alarm," "I" is the subject of the whole sentence, but "who" is the subject of the second clause, because "who" is still the performer of an action: setting off the alarm.

Again, though, that's straightforward—that's already what we do. What about the more enigmatic "whom"? What exactly does it mean to "refer to the object of a preposition or verb"? Well, it means the subject, the person (or thing) performing the action, is something else. The person that the subject is performing the action in relation to should be referred to as "whom." Yes, that's confusing, but here are some more examples.

A trick to figure out which to use

Yes, that all sounds pretty complicated. But there's a useful, and very simple, trick to make sure that you're using each one properly. It requires a quick substitution: If you can substitute subject pronouns, like "he" or "she," in for the "who/whom" word and the sentence still makes sense, use "who." If an object pronoun, like "him" or "her," makes sense instead, "whom" is correct. (If the original sentence is a question, this will make more sense if, instead of using the same sentence verbatim, you answer the question.)

Let's review the above-listed examples with the substitutions:

Should you always use this rule?

And here's another grammar tidbit on that subject. Technically "incorrect" sentences like these are also a big cause of the grammar kerfuffle that arises around ending a sentence with a preposition. When a sentence that should technically say "to whom" or "with whom" switches "who" for "whom" and sticks the preposition at the end, yes, that's technically incorrect sentence construction. But, like the strict correct usage of "who" vs. "whom," this preposition rule is one of the grammar rules it's probably safe to ignore.

Who vs. Whom: Here's When to Use Each Word, Source:https://www.rd.com/article/who-whom-proper-use/