Which Is Worse for the Environment: Driving or Flying? 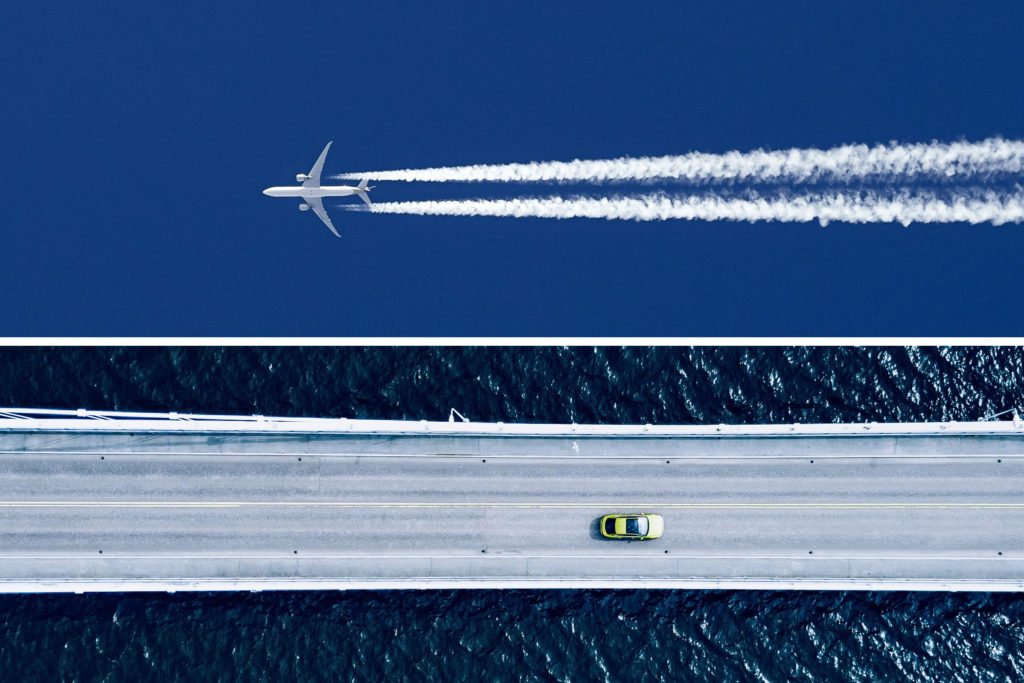 Not all trips are created equal—especially when you consider how they can harm the planet.

You've probably heard that flying is harming the planet, but is driving is any better? Both modes of transportation contribute to greenhouse gasses, exacerbating the current climate crisis. The answer to whether one method is worse for the environment is…complicated.

"The environmental impact of choosing one mode of transportation over another, in this case driving versus flying, depends on a large numbers of factors, such as the distance traveled, how far away one would need to drive to get to the airport, how many people are traveling in the plane or car to the same destination, the vehicle's fuel efficiency, and so on," says Sandra Goldmark, Director of Campus Sustainability and Climate Action at Barnard College in New York City.

While it's definitely a lot to think about, your individual actions can truly make a difference. With that in mind, here's how experts say you can make smarter travel choices and reduce your carbon footprint. While you're at it, learn which "eco-friendly" habits are actually worse for the environment.

Tourism releases 5 percent of all energy-related carbon dioxide (CO2) global emissions, with three-quarters of the greenhouse gas generated from transportation, according to a United Nations World Tourism Organization report (based on data from 2016).

Now let's take a closer look at that transportation. The EPA states that "a typical passenger vehicle emits about 4.6 metric tons of carbon dioxide per year." Comparatively, a cross-country, round-trip flight in economy from New York to Los Angeles produces an estimated 0.62 tons of CO2 per passenger, according to the UN's International Civil Aviation Organization (ICAO) carbon calculator. Essentially, one long flight releases the equivalent of nearly 14 percent of the annual emissions from your car. The same route, when driven, will result in the release of 1.26 tons of carbon emissions. (Those calculations are based on the EPA's estimated release of 411 grams of CO2 per mile from an average passenger vehicle getting 21.6 miles per gallon.)

When comparing the number of emissions per person, it may seem like flying is better than driving. However, when more people share the drive, emissions per person are reduced, making driving more environmentally friendly than flying. But if you are driving cross-country solo, you are better off taking to the skies.

Even though you are sharing an airplane with others, driving is better than flying when it comes to reducing your carbon footprint, especially when you are sharing the ride with others and/or driving a fuel-efficient car. "For a relatively short trip (300 to 500 miles), the most efficient approach would be a fuel-efficient vehicle (hybrid or electric) with multiple passengers," says former EPA official Janet McCabe, a professor at the Indiana University McKinney School of Law and Assistant Director for Policy and Implementation at IU's Environmental Resilience Institute. "A hybrid or all-electric car emits less per passenger mile than a diesel- or gasoline-powered car."

Goldmark echoes that sentiment: "Air travel is a big cause of emissions for individuals, businesses, and organizations. Aside from air travel, your best bet is a shared ride—whether it is on a train, bus, or carpool (ideally in an electric or hybrid car)." In addition to greenhouse gasses, an aircraft releases "nitrogen oxides, sulfur oxides, hydrocarbon, and soot particulates," according to the Environmental and Energy Study Institute. These pollutants, along with the emissions released during takeoff and landing, contribute to the overall greenhouse effect, making even short flights less eco-friendly. FYI, these are the 14 countries doing the most to protect the environment.

If you do decide to fly for your annual vacation or when visiting your family during the holidays, you won't be the worst offender. Those who take multiple round-trips a year contribute most to aviation emissions. "At the end of the day, the impact of an annual holiday flight gets swamped by emissions from American frequent flyers, who on average fly 14 times per year," Dan Rutherford, aviation director at the International Council on Clean Transportation (ICCT), told The Mercury News in 2019.

Before you try for that upgrade, consider this: Flying in first class is more harmful to the environment than slumming it in economy. According to a 2013 study conducted by the World Bank, emissions associated with flying are three times greater in business class (and even more for first-class). "The main reason why the footprint per traveler per distance traveled is greater for business/first class than for economy class is that a seat in the two former classes takes up a larger than average floor space in a given airplane," the report explains.

Private flights are even worse. "Although the amount of fuel burnt and, therefore, CO2 emitted is a lot lower than a commercial jet, generally speaking, there will be far fewer people on board," writes Helen Coffey for The Independent. "Some estimates say private jets produce 10 times the amount of carbon per passenger."

And flying on a commercial plane during COVID-19 not only carries an inherent risk of infection, but it's far worse for the planet because of the low number of passengers. "Running a flight with a single passenger, which unfortunately happened in April with Delta, is terrible for the environment," says Goldmark. Here's how else travel has changed since the pandemic started.

And now for another layer of complication: A longer flight is more efficient than a shorter flight or one with multiple layovers. "A large share of fuel in flying is consumed during takeoff and landing, so the greater the distance, the smaller the relative fuel consumption burden from takeoff and landing is on the overall flight," explains Nicholas Muller, PhD, a professor of Economics, Engineering and Public Policy at Carnegie Mellon's Tepper School of Business. In fact, a NASA report from 2010 states that a quarter of airplane emissions come from landing and taking off, with taxiing being the largest source.

McCabe recommends that "if you need to fly (and sometimes we do), flying direct is better than stopping because planes use more fuel on takeoff and landing than they do when they are cruising." Additionally, planes used for shorter distances are smaller and don't carry as many passengers, with greenhouse emissions distributed among fewer individuals. Learn the real difference between direct and non-stop flights.

Alternatives to driving or flying

The most eco-friendly way to reach your destination may not be by car or airplane. According to an ICCT report, on comparable trips in the United States, a plane gets 43 miles per gallon per person; this is less efficient than trains or cars, which get 51 mpg and 53 mpg per person, respectively. Interurban buses are, by far, the most efficient at 152 mpg per individual. Buses are the clear winners when it comes to efficiency compared to cars and planes; the only time a car becomes greener is when it's either a hybrid carrying at least three or four passengers, or an average sedan with five passengers.

If you are traveling in Europe, or in a country offering intra-city trains, traveling by rail is the most efficient and eco-friendly way to get around, especially since some trains operate on electricity. "Traveling by train typically has far fewer emissions per passenger than traveling by plane," John Oppermann, Executive Director of the Earth Day Initiative, told Reader's Digest when discussing the most environmentally responsible ways to travel.

If you want to be more environmentally responsible on your next road trip or flight, there are more ways to reduce your carbon footprint. One idea: If you're taking a long road trip, "drive the family car and leave the pickup truck, SUV, or van at home," Michael Sivak, of the University of Michigan's Transportation Research Institute, suggests in a Yale Climate Connections article. Or leave your gas guzzler at home and consider renting a hybrid. "In many cases, savings from the gas will make up the rental cost," notes Samantha Bray, Managing Director at the Center for Responsible Travel, in an article in Mic.

For air travel, Bray also recommends booking with airlines that are using biofuel. Biofuel comes from natural sources like non-edible natural oils and agricultural wastes. In 2016, United Airlines started using sustainable aviation biofuel in all their planes out of Los Angeles. Bray also urges travelers to research and book flights on larger and/or newer planes that are more fuel-efficient. According to a report from ICCT, Frontier, Spirit, and Southwest Airlines were the most efficient domestic carriers in 2019.

"Offsetting emissions and avoiding emissions are two different actions," says Muller. "Offsetting typically occurs through an exchange." What kind of exchange, exactly? You can offset your emissions by donating money to the development of clean-energy alternatives, such as projects that focus on replanting or conserving forests, or constructing wind farms. The first step is to calculate your carbon footprint. Use carbon calculations from the Nature Conservancy and the International Civil Aviation Organization to determine your potential impact and make comparable donations to offset the greenhouse emissions.

When flying, you can buy offsets from airlines such as Delta, United, and JetBlue, which directly support community-based conservation, carbon-reduction projects, and sustainable businesses. Offsetting programs offered by airlines aren't the only ones out there; websites like Atmosfair, Cool Effect, and TerraPass also provide ways to contribute. Next, check out these other simple ways to reduce your carbon footprint, whether or not you're traveling.

Which Is Worse for the Environment: Driving or Flying?, Source:https://www.rd.com/article/which-is-worse-for-the-environment-driving-or-flying/