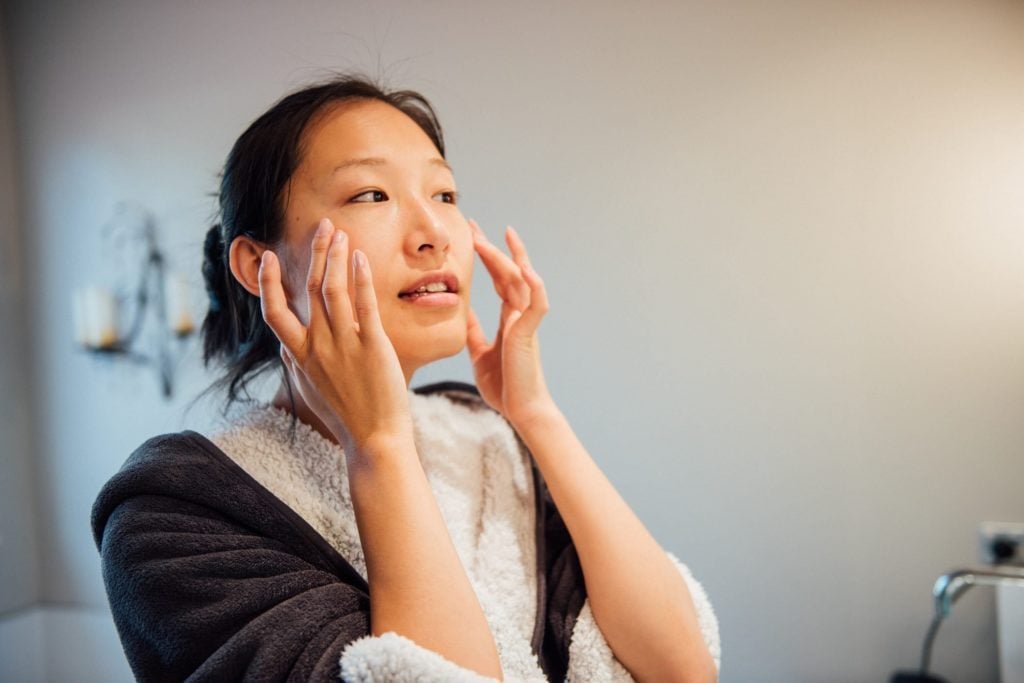 Finding remedies for the redness of rosacea can be challenging. Here's what you can do at home to help calm your skin.

For many people with rosacea—a skin condition that affects more than 16 million Americans—dealing with the ever-present redness on your face can be a challenge. You may always be on the hunt for treatments and home remedies for rosacea to ease the redness and inflammation.

"Rosacea patients suffer from a range of symptoms—from inflammatory papules and pustules [aka pimples] to flushing, from generalized facial redness and broken capillaries to an overgrowth of nose tissue known as rhinophyma," says Jason A. Clark, a board-certified dermatologist and adjunct assistant professor of dermatology at Emory University in Atlanta. With rosacea, there is an "underlying pro-inflammatory state," he says. But the root cause of the inflammation that leads to redness is elusive. Doctors don't know exactly why some people get rosacea.

The lack of answers can be frustrating for those who have the condition and are tired of how their persistent redness affects their quality of life. In particular, "the flushing is really what's embarrassing to people, because oftentimes when you flush people think you're sick," says dermatologist Mona Gohara, associate clinical professor in the department of dermatology at Yale School of Medicine. "That's what I hear from my patients: They'll flush, and then everybody around them says, 'Are you OK? Are you OK?' It's embarrassing."

Even though dermatologists don't know the exact cause of rosacea, they have medications and laser treatments that can help with the inflammation and dilated blood vessels. There are also dermatologist-approved things you can do at home to help ease symptoms. But don't try just any home remedy for rosacea, because some purported treatments could actually make things worse. Also, these techniques and lifestyle changes aren't meant to replace medical treatment. So you should continue to follow your doctor's recommendations.

(Related: What You Need To Know About Rosacea, Straight From a Dermatologist)

One of the most important home remedies is to avoid anything that triggers your rosacea, or makes it worse. "Triggers include stress, spicy foods, hot baths, alcohol, and hot beverages," says Channa Ovits, a board-certified dermatologist at Westmed Medical Group in Westchester, New York. Changes of emotion, heavy exercise, and changes in temperature can also bring on sudden flushing.

Rosacea triggers aren't the same for everyone, so if you aren't sure what's causing your skin reactions, keep a log of the circumstances when your symptoms flare. If you experience episodes of flushing when you drink alcohol, for example, it's probably a trigger. In addition, says Dr. Clark, "certain medications—like niacin and topical steroids—can worsen rosacea."

"People usually can identify their triggers right away," says Dr. Gohara. "They're like, 'When I go out and drink red wine, I'm so embarrassed. My face just completely goes on fire!' "

Some triggers, though, are harder to avoid than others, she adds. "If you know that spicy food is a trigger, you avoid that. But there are certain things you can't avoid: You can't avoid temperature changes." You can, however, dress in layers to help your body cool down or warm up as needed.

Stress, another trigger for many people, is also harder to control, especially since having rosacea itself is stressful. In a survey from the National Rosacea Society, 79 percent of rosacea patients polled said stress was a trigger for them. Using stress management techniques like deep breathing or meditation can help. You can also focus on a hobby, start a mind/body practice like tai chi, or join a rosacea support group.

There's no miracle diet that will cure rosacea. Apart from avoiding spicy food or hot food, "there's not an anti-rosacea diet," says Dr. Gohara. "Skin is one of our biggest organs, so just like you would treat your heart or any other organ, eat a healthy diet. We recommend an anti-inflammatory diet. So that means low glycemic index and cutting out junk food."

In other words: Reduce saturated fat, refined carbs, and sugar; and load up on green veggies, healthy fats, and whole grains. And consider adding foods that are good for your gut, such as those rich in fibre, probiotics, and prebiotics as part of your healthy diet, as long as they aren't triggers for you. Research, including a study published in 2017 in Dermatology Practical & Conceptual, suggests there may be a connection between gut health and rosacea.

In addition, "there is some evidence that for some people eliminating dairy might make a difference," says Tanya Kormeili, MD, a board-certified dermatologist in Santa Monica, California. "However, there are people who eat dairy and have no rosacea."

If you're not sure of your triggers, keeping a food diary can help you identify specific foods that might bring on your rosacea flares.

(Related: A Decade-by-Decade Guide to Changing Up Your Skincare Routine)

You might think that having skin problems means you need to be constantly cleaning your face with myriad products—but nothing could be further from the truth.

"It's best to have a really basic skin-care routine," Dr. Gohara says. "You want a gentle, non-soap, pH-neutral cleanser so that your skin barrier isn't irritated," and "a hydrating moisturizer that helps repair your skin barrier and keep it strong."

And avoid anti-aging products. "Some people in their mid-thirties, forties, and fifties are putting on a lot of anti-aging creams, which can stoke the fire and inflame your skin," Dr. Gohara says. Chemical peels and skin masks are also off-limits.

Sunscreen is another key part of your rosacea skin-care routine. "Some people theorize that rosacea is actually a form of sun damage, although that's not in-the-book science," Dr. Gohara says. Still, it's clear that the sun has an impact on symptoms: In the National Rosacea Society survey, sun exposure topped the list of triggers, with 81 percent of those polled saying sun exposure makes their rosacea worse.

To protect your skin, use sunscreen, "preferably mineral sunscreen, with the active ingredients zinc oxide or titanium dioxide," suggests Dr. Ovits. These two ingredients are recognized by the FDA as safe and effective, and least likely to irritate your skin, according to the American Academy of Dermatology. They sit on top of your skin to block the sun's rays, rather than being absorbed into it. In addition, wear a hat and stay out of the midday sun.

(Related: How to Avoid Maskne, According to Dermatologists)

If you remember the color wheel you learned in art class, green is on the opposite side of red. "To mitigate the flushing and the redness on a day-to-day basis you can use green-tinted makeup, which neutralizes red so flushing isn't as obvious," Dr. Gohara says. "And so women—and men for that matter—who are comfortable wearing makeup can do so."

In choosing makeup, the American Academy of Dermatology says to make sure products are light and liquid-based, and not heavy or waterproof. Mineral-based makeup may be a less irritating choice; apply a fragrance-free moisturizer first to protect your skin before putting it on. You may also want to skip the red lipstick, as it can draw attention to redness in the face as well.

You may have heard that lavender, chamomile, and green tea can help treat rosacea. But research, including a review of studies published in 2015 in Phytotherapy Research, suggests there's not enough evidence to show that botanical and cosmeceutical therapies are effective therapies for rosacea. The doctors we spoke with cautioned against their use.

"We generally try to avoid herbs and essential oils in rosacea treatment," Dr. Gohara says. "They can be triggers for the flushing or inflammatory phase." And botanicals should never be used in place of medical treatments. "In terms of do-it-yourself, at-home remedies, there aren't so many with rosacea. It requires medical intervention."

In terms of dietary supplements, there may be some benefit in taking anti-inflammatory omega-3 fatty acids, but research is limited. Otherwise, "niacinamide is the best-documented natural vitamin to help with rosacea," Dr. Kormeili says. Niacinamide is a water-soluble form of vitamin B3, which is anti-inflammatory and may keep skin hydrated. It's also found in some skincare products. Talk to your doctor about whether it makes sense for you.

If you know in advance that you'll be in a flush-inducing situation—say, for instance, you're navigating your first big work presentation on Zoom—Dr. Gohara suggests this simple health hack: Suck on an ice cube beforehand. It'll help cool you down so you don't flush as much, she says. Draping a towel dipped in cold water around your neck or holding a bottle of cold water against your neck also helps.

Next: 10 Vital Skin Care Practices and When to Start Them