‘I Decided to No Longer Be in Disguise’ 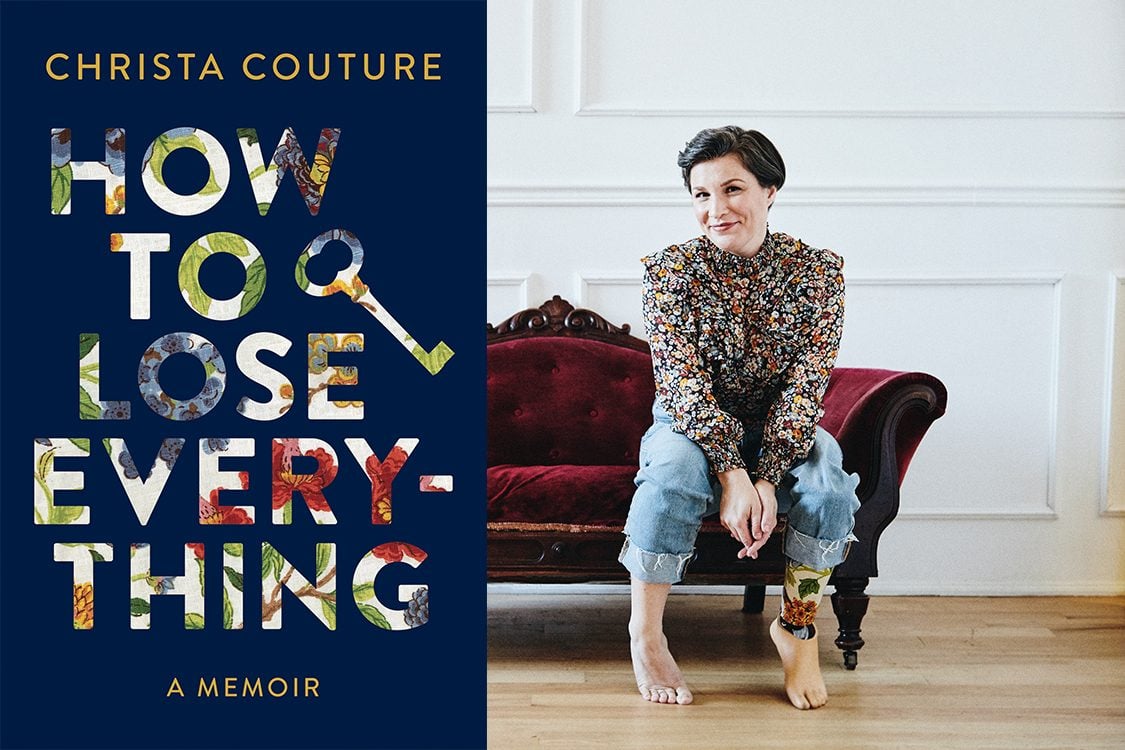 Christa Couture's tender and compassionate memoir, How To Lose Everything, runs just 186 pages — a quick breath, as memoirs go. It's not for a lack of stories to tell; if our lives are measured by how we weather hardship, then Couture has experienced more life in her 41 years than most people twice her age. The book chronicles the Indigenous artist and broadcaster's journey through multiple devastating losses, starting with the loss of her leg to cancer at the age of 12, followed by her first son, Emmett, who died after complications at birth, and her second son, Ford, whose heart gave out when he was 14 months old. A divorce and another round of cancer was waiting for her on the other side — but so were new beginnings, a successful career and, eventually, a healthy baby girl.

So, if 186 pages seems a bit slim, it's because Couture knows, perhaps better than any of us, the stories that truly matter — the ones that force us into spaces that may be uncomfortable, but deepen our capacity for compassion, and our understanding of different perspectives.

Below, she describes the shift that happened when she test drove a new, advanced prosthetic (called a C-Leg), and the freedom she felt when she decided her disability was not something to hide.

(Related: Book Excerpt: Inside the Life of a New Dad, Who Knew He Was Dying)

"Just walk down the stairs. Step over step. Do it," she said. Counter to instincts yelling, "YOU WILL FALL, DON'T DO IT," I lifted my right leg, shifted my weight to my left and felt the knee bend slowly, bearing my weight, lowering me onto the next step. I repeated the motion, astonished, for the remaining four steps and launched myself into my physio's arms. I had to hug her; the experience was a revelation. My body remembered the sensation of descending stairs. One foot over the other was like looking at long-lost photographs, an ecstatic recollection.

Returning the C-Leg after a month, I felt like I was turning into a pumpkin. I posted a photograph to Facebook saying so, and for a lot of folks in my community, it was the first time they'd realized I didn't have a leg. It was also, for many, the first time they'd considered walking down stairs as extraordinary. I didn't expect the response, but as the comments started rolling in, a proposal: Let's crowdfund a knee!

Five years had passed since Ford died, and I believe the helplessness people felt in supporting me for that loss and the loss of Emmett was given an antidote by this action they could take. We called it the Kneeraiser, and when it launched, we raised fifteen thousand dollars in less than two days. Another ten thousand dollars came in over the coming weeks.

The large sums were meaningful, but more affecting were the donations of ten or twenty dollars from musicians and artists I knew could barely afford it. With the money waiting to be spent, I did a one-month trial with the Rheo 3 knee, preferred it to the C-Leg and wrote the biggest cheque of my life. I didn't know how to say thank you. I wanted to celebrate. I decided to no longer be in disguise.

"How do we make an affordable version of this?" I said, holding up my cellphone to my prosthetists, showing them photos of a hand-painted prosthesis adorned with winding flowers from toe to hip.  The answer was simple: lamination.

The great Vancouver drag queen Joan-E once said at a drag bingo night, "If you can't hide it, decorate it." Her words came thundering back when I saw my flower leg for the first time. I was not just making my disability visible, I was putting up a neon sign pointing to it. That boldness began to make me feel like I had a superpower. The old, embarrassed "oh, sorry!" reply when I told someone I only had one leg was replaced with excitement and interest—people saying they thought the flower leg was gorgeous or asking how it was made or how it worked. No longer questions about how I lost my leg; almost exclusively appreciation for the artfulness of it.

That has continued, though occasionally people still get it wrong.

Waiting in line for a bus, I was wearing a skirt, so my prosthetic leg was visible. A man approached and motioned for me to take off my headphones.

"I just want to say, I think you're an inspiration."

He pointed to my leg. "It's incredible, what you're doing." Waiting for the bus? I thought. "Um, thanks," I said. I imagined that he thought it was a feat for me to leave the house, to be seen in public. Hot tip: before you tell a person with a disability they're an inspiration, make sure they're doing something actually inspirational.

Once, at the airport, I parked in the accessible spot, my parking permit clearly hanging off the rear-view mirror. The parking attendant on duty shouted at me from a few cars back, "You can't park there!"

"I have the permit!" I said, pointing to my car.

"But you're not disabled!" he said.

By then, he'd caught up to me and we were face to face. "I am disabled," I said, not wanting to say anything else.

"I only have one leg," I conceded. He looked me up and down before he gave his own "harrumph" of concession and walked away.

"Well, you don't look ignorant, but you are," I said, wishing I'd thought of it while he was still in earshot. I wanted him to understand that I have the permit so I don't have to explain things.

In the parking lot of a grocery store with my friend Susan, a man approached. "Can I ask you about your leg?"

"Sure!" I replied, by now used to questions about how the floral cover got made, is it painted, can they take a picture for their cousin who's also an amputee, and so on.

"Were you born this way, or did you lose your leg?" he said. I don't mind the question, though it wasn't what I expected.

"It was amputated when I was a kid. I was lucky, though, it was the cure for my cancer," I said, giving my usual spiel. "It's a good thing."

He nodded. "So you were born whole. The Lord intended you to be whole," he said. Stunned, I didn't interrupt him straightaway. He continued to tell me the story of a local preacher. "He was a preacher in the 1800s who lost his leg. And he prayed so hard and long that the Lord would return his leg to him, that one night in prayer circle, the Lord grew him a leg right there in front of his parishioners."

"Ummm." I was searching for words.

"Are you a Christian?" he said.

"No," I said with please-stop-talking clarity.

"Well, if you prayed to the Lord—"

He put up his hands and started to walk away, calling back, "Miracles do happen." Susan and I got in the car, and as she drove, I said everything else I wanted him to know: how dare he presume I want to be changed.

From How to Lose Everything: A Memoir, by Christa Couture©. 2020. Published by Douglas & Mcintyre. Reprinted with the permission of the publisher.

Next: Take That, 2020: The Book That Reminded Me Change Is Possible

'I Decided to No Longer Be in Disguise', Source:https://www.besthealthmag.ca/best-you/wellness/christa-couture-how-to-lose-everything-excerpt/