Average Life Span of the Appliances in Your Home 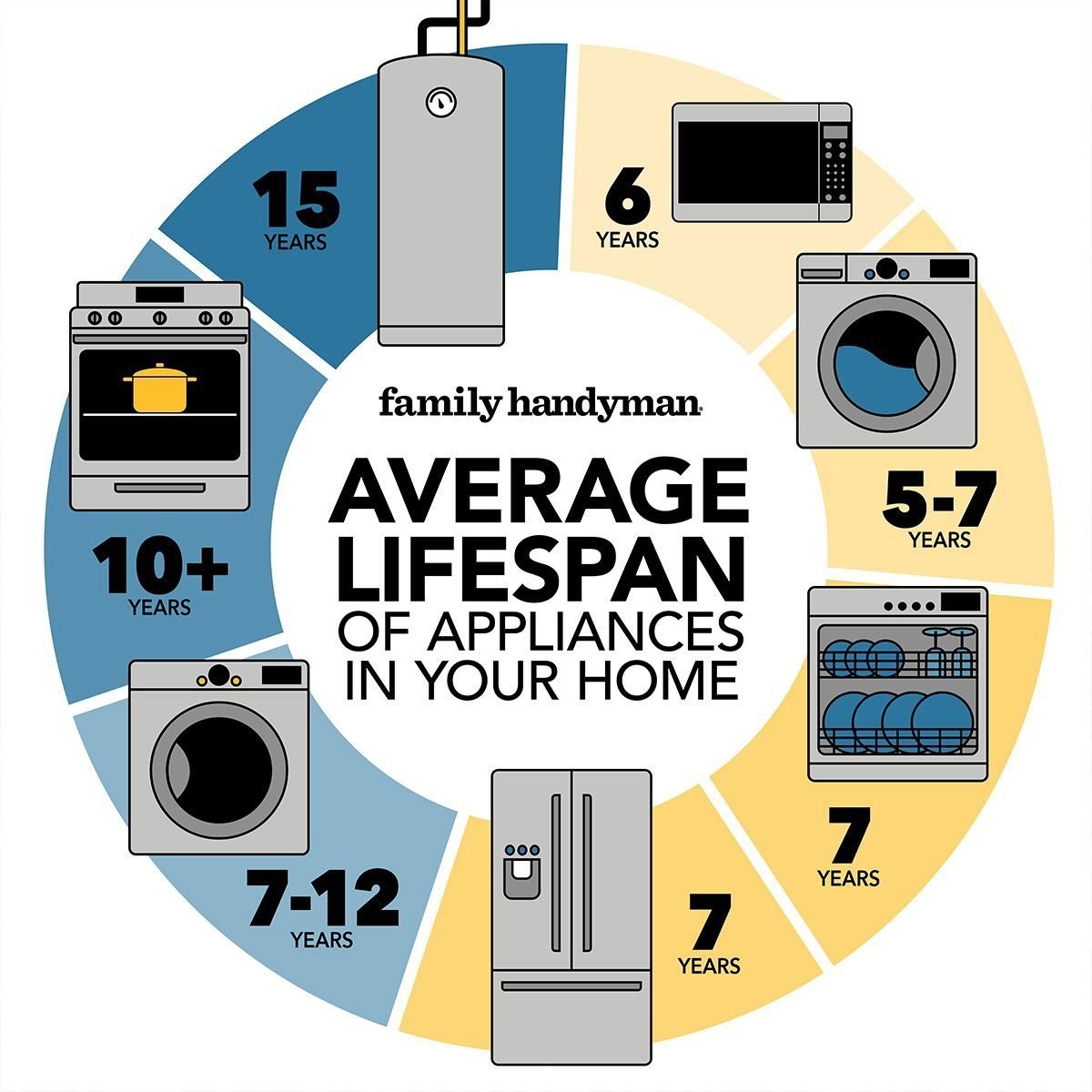 Learn how long you can expect your major household appliances to last.

Average lifespan of your appliances

Healthy appliances contribute to a smoothly operating household—that is, until they don't. People often take these big-ticket workhorses for granted, ignoring routine maintenance and the time that has passed since installation. This can shorten appliance lifespan and require you to spring for a new one, perhaps before you're financially ready.

It's also worth noting that lifespans for most major appliances have decreased significantly over the past 25 years, mainly due to the additional bells and whistles in today's electronically-controlled models. That's according to Brent Wasieleski, lead technician at Watson Appliance in Stillwater, Minnesota.

Often, he says, it pays to repair an older appliance. It was probably built on a more robust platform than newer models, and the repair may keep it running as long as the projected lifespan of a new model. He also notes that manufacturers' commitment to quality control is not what it used to be. Learn which appliance brands are the most reliable.

Here's a roundup of typical lifespans for current models of your home's major appliances.

You can expect a typical new refrigerator to last about seven years. Watch out for these signs your refrigerator is failing.

Make it last: Maximize the lifespan by adjusting the freezer setting to 0 degrees F. and the refrigerator to 36 to 37 degrees. These are the best compromises between efficient food handling/safety and sparing the compressor from excess load.

A typical new dishwasher will also last about seven years, particularly if you don't make these mistakes.

Make it last: Excessive soap is the No. 1 enemy of your dishwasher. Detergent with no grime to fight tends to attack seals and mechanisms within your appliance, and can even etch your dishes. Despite what the box says, one tablespoon is enough detergent to get your dishes sparkling clean. And if you use encapsulated dishwashing pods, skip the rinse enhancer — it's already in the pod.

Your oven and cooktop, whether separate or a single unit, make up the sturdiest appliance in your kitchen, often lasting 10 years or longer. It's often the body or the electric control unit that goes bad before the cooking units. Or the style becomes dated, triggering desire for a new appliance.

Make it last: Our expert recommends skipping your oven's self-cleaning cycle, which often runs too hot (up to 1,100 degrees F!) and over-stresses the construction, shortening the lifespan.

You can expect a new microwave to last about six years.

Make it last: In general, use the microwave for the quick-heating tasks it was designed for and leave the heavy work for your conventional oven.

Make it last: As with the dishwasher, excessive soap is the leading cause of washer issues. Use only one to 1-1/2 tablespoons per load, regardless of machine type, Wasieleski says. (Really, that's all you need!) Excessive soap builds up in the machine, causing the tub to smell musty and damaging the gaskets, seals, and bearings.

Make it last: Although it's tempting to skip cleaning the lint trap between loads, a clogged trap is the top reason for stress on your dryer. Clean it every time. Skip the dryer sheets, too, according to our expert. Their waxy film can build up on the lint screen, causing the dryer to have to work harder (and the screen to clog faster).

For the same reason, clean the dryer vent a couple of times each year. Buildup there impairs the operation of your dryer and speeds its demise. Here are 9 things you never knew your dryer could do.

According to Water Heater Database, an online data-sharing tool for licensed plumbers, the average lifespan for a water heater is approximately 15 years across seven common brands.

Make it last: Keep sediment from building up in your tank by flushing out one or two gallons of water once or twice a year. Be aware there's a corrosion-control device in your water heater, called a sacrificial anode rod, that should be replaced every three to five years. If you're into DIY, check out this list of home repairs anyone can do.

Average Life Span of the Appliances in Your Home, Source:https://www.rd.com/article/average-life-span-home-appliances/