How Much Caffeine Is in Death Wish Coffee? 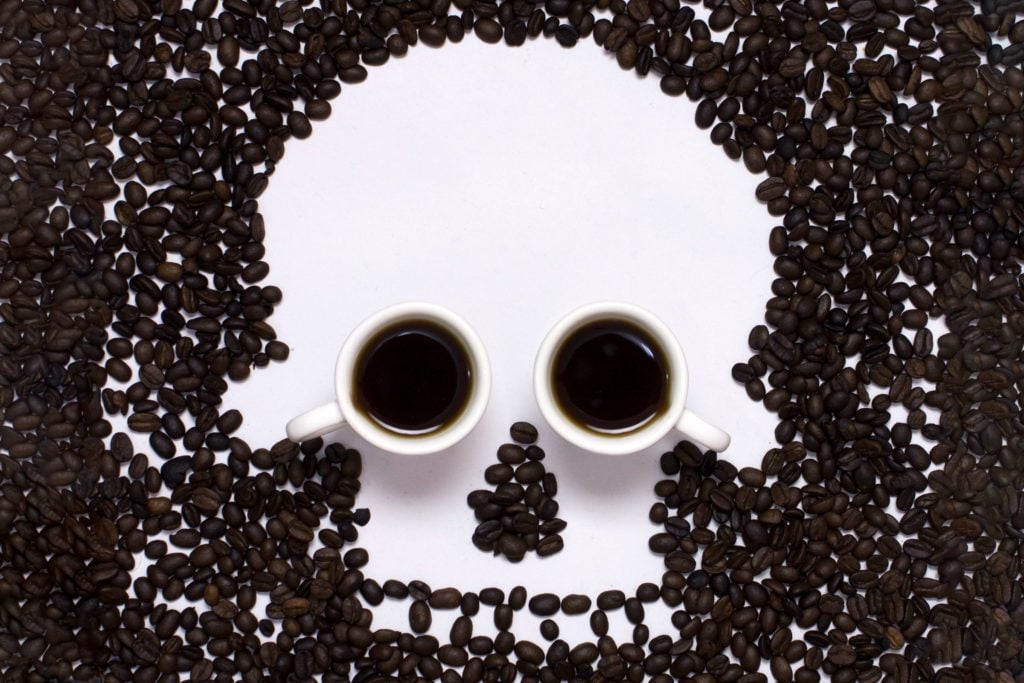 It's been called the world's strongest coffee. But is it safe?

Picture a large black food truck rumbling down the street, with a skull and crossbones on it, and the ominous warning #fueledbydeath. While it's not exactly the image you first conjure up when you think about your hot and steamy morning cup of Joe, Death Wish coffee is making news.

Claiming to have the "world's strongest coffee," it's daring coffee lovers around the world to try the blend. Death Wish has even made its way into outer space, sending its coffee to the International Space Station.

Now sold in about 12,000 grocery stores and a few small shops around the country, the coffee has everyone wondering: Just how strong is it? Here we break down the details of the coffee, how much caffeine it really has, and whether it's a healthy choice.

Coffee: From vice to healthy choice?

Coffee has long had a reputation as an unhealthy, but necessary vice. Lots of recent research, however, suggests the opposite. When consumed in moderation, coffee may reduce inflammation, act as an antioxidant, and protect against some diseases, including certain types of cancer.

That's just the tip of the iceberg. Other health benefits linked to drinking coffee include a lower risk of depression, better heart health, and improved concentration and sports performance. No wonder it's been referred to as a "miracle drug."

But not all coffees are created equal, especially if your latte is laden with sugary creamers and additives. Consumers also have to weigh the risks and benefits of higher levels of caffeine intake.

Coffee by the numbers

Almost 30 percent of Americans consume two cups of coffee per day; 13 percent drink three cups; and 14 percent have four to five cups. A whopping 9 percent down six or more cups each day, according to a 2019 survey of more than 800 people by Statistica. The study included only at-home coffee consumption, so those numbers could go up based on coffee-shop purchases and at-work drinking habits.

The average eight-ounce cup of coffee has about 96 mg of caffeine. This means those three- to five-cup drinkers are still in the "safe" zone of a healthy coffee-drinking habit, according to the USDA's dietary guidelines, which cap a healthy caffeine habit at 400 mg. Bear in mind caffeine isn't just found in coffee.

Keep in mind that if you are a Starbucks fan, your baseline for an average cup of coffee may be higher: the popular Pike Place brew has more than twice the typical caffeine at 235 mg for a "tall" size, and the other roasts only go up from there. Confused? Here's the lowdown on the Starbucks sizing system.

The story behind Death Wish Coffee

In 2011, Death Wish Coffee founder and CEO Mike Brown was working at a coffee shop in Saratoga Springs, New York when he noticed how early morning customers would say, "Give me your strongest cup of coffee." His strongest brew didn't seem strong enough. So he played with bean combinations and roasts until he produced "the world's strongest coffee."

Inspired by a novelty, death-wish referencing koozie (the foam sleeves used to insulate beverage containers) that his girlfriend had given him around the same time, Brown launched the brand. "He thought that perfectly encapsulated Death Wish as a product," says Shannon Sweeney, Death Wish Coffee marketing manager. "Our branding is modeled over old poison bottles. Obviously, it isn't poisonous, but it encompassed being the world's strongest coffee—no BS."

Sweeney says the coffee competes with similarly branded products such as Black Rifle and Bones coffee. Caffeine Informer ranks Death Wish Coffee as one of its 12 strongest coffee brands, while Fox News reports Death Wish as the strongest around.

How much caffeine is really in the world's strongest coffee?

Nobody knows for sure; it's a company secret. "We say double the strength of the average cup of coffee," Sweeney says. In a blog post by Brown, he claims, "With as much caffeine as three cups of coffee, Death Wish Coffee may result in sleepless nights, energetic mornings, and productive days."

These estimates would put the coffee at nearly 300 mg per cup, based on USDA coffee caffeine tallies. Other sources who have measured the caffeine content claim it contains much more than that. In 2015, the Caffeine Informer tested the coffee in the EMSL Food Chemistry Lab and found that it has over 700 mg per cup and a ranking level of "dangerous." But it also notes that other tests done in the SDS Agri Food Laboratory have found it to contain less caffeine than that.

According to Consumer Reports, Death Wish has 472 mg per cup, which is still the equivalent of drinking nearly five cups of coffee. Using this estimate, one Death Wish coffee would be like consuming two "tall" Starbucks coffees (12 fluid ounces each).

Sweeney emphasizes that strength is relative in many cases and depends on how the coffee is brewed. It should be measured in not just caffeine, but in "boldness and flavor." She also explains that, unlike energy drinks that have added caffeine, Death Wish Coffee's roasting process produces the strongest coffee naturally, and results in a smooth chocolate and cherry flavor that's "not acidic or bitter." Their coffee is made with arabica and robusta beans from India and Peru. Do you know these secrets to making the perfect cup of coffee?

Is it safe to drink Death Wish Coffee?

There's a difference between drinking 400 mg of caffeine in a single cup of coffee versus in four cups throughout the day.

"It is not advisable to consume that much caffeine at once," says Nicole Avena, PhD, assistant professor at Mount Sinai Medical School and a visiting professor of health psychology at Princeton University who specializes in diet, nutrition, and addiction. "Over time, drinking that much caffeine can cause high blood pressure. And it can cause mood swings from the ups and downs of the caffeine leaving your system."

Avena calls herself a former "legit coffee addict" who used coffee to get through the day. "I decided about a month ago to just cold-turkey quit because I felt like it was making me jittery when I had Starbucks in the afternoon," she says. "I was amazed by how quickly it made me feel better."

However, fans of Death Wish Coffee don't have to worry about a true caffeine overdose unless they are consuming three or more cups of the coffee at once.

"The FDA warns that rapid ingestion of more than 1,200 mg of caffeine can result in caffeine overdose," says Jabraan Pasha, MD, an internal medicine physician in Tulsa, Oklahoma. "That is about 12 cups of coffee or five energy shots. People may experience nausea, vomiting, diarrhea, disorientation, or even seizures from caffeine ingestion at those levels."

Consumption of caffeine in much lower doses can also pose some problems, he adds. "Consuming more than two to three cups of coffee per day can leave some feeling jittery or agitated," says Dr. Pasha. "It can also lead to a 'crash' later in the day, prompting more caffeine consumption."

He advises certain people with other medical issues—including those with cardiac arrhythmias, acid reflux, anxiety disorders, and sleep disorders—to avoid these levels of caffeine.

Who is the typical Death Wish Coffee drinker?

If you have to work in the middle of the night, a quadruple cup of coffee all in one mug may sound appealing. Sweeney says that a lot of their consumers are people who need something to physically stay awake at night, "whether it's first responders, nurses or doctors, or shift workers—people who work overnight and need a strong cup of coffee because they are waking up for the 3 a.m. shift or working two 12-hour shifts in a row."

She also explains that most buyers are typically middle-aged, between 30 and 40 who can afford a pricey brew. A one-pound bag of Death Wish Coffee, equaling around 72 servings, costs $19.99.

Next, if you've had a cup too many, try these foolproof ways to relax and unwind.

How Much Caffeine Is in Death Wish Coffee?, Source:https://www.rd.com/article/how-much-caffeine-death-wish-coffee/